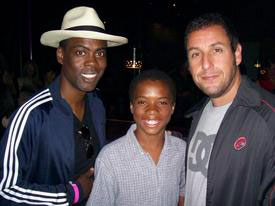 PLYMOUTH — It can take hours to get that shot.

If you’re not lucky, things go wrong and it could take days.

But, at just 11-years-old, Xavier Dillingham is prepared for the quiet, waiting world of movie making. He’s exchanged banter with David Spade, laughed with Chris Rock and Adam Sandler and eaten the same catered breakfast before heading to wardrobe early Monday morning. This is one boy who will walk away from the summer of 2009 with his eyes wide open about the film industry; the world of make believe is oh-so-real when you’re living it as a child on the set of the upcoming movie Grown Ups.

Xavier Dillingham was prepared for what awaited on the set because he was briefed on the biz by his dad, Roger Dillingham Jr., a Plymouth emergency medical technician-turned-actor/model and set medic. Dillingham stuck his pinky toe into the movie-industry several years ago before opting to immerse himself in it.

Roger Dillingham has bagged minor roles in big movies. You might recognize him in The Game Plan as a member of the paparazzi who The Rock beats on, or as a forensic team member in Madso’s War. Dillingham played a paramedic in The Box and appears in soon-to-be-released movies Edge of Darkness and Valediction as an Amtrak worker and security guard, respectively.

Dillingham worked for years as an EMT in Plymouth and surrounding towns, saving lives and responding to emergencies so intense, he confesses he’s come to forget many patients’ names – he was focused on other things at the time, like their pulse. His side job as a model led Dillingham to venture into auditions that led to his current job as movie actor/set medic on a myriad of films.

This week, Dillingham was working as a medic on the set of the film Furry Vengeance, starring Brendan Fraser and Brook Shields, in Topsfield at the Crane Estate. Meanwhile, his son, Xavier, worked as a photo double for Nadji Jeter on the set of Grown Ups, filming this week in Wareham.

“He had such a blast working with those guys, and he fit right in and was welcomed,” Dillingham said.

A photo double is an actor who literally doubles for another actor who is cast in a film. In this case, the young actor Nadji Jeter needed a photo double who looked like him due to laws that limit the amount of time a child can work on a set. When Jeter is not available, Xavier fills in for him on shots that don’t require the actor’s face.

It’s a fitting first step for Xavier, whose father played a body double for The Rock in The Game Plan in addition to the photographer role.

Set medics like Roger Dillingham are needed if and when an actor or crewmember becomes injured or sick; Dillingham’s wealth of experience as an EMT comes into play here.

And Xavier’s patient demeanor comes into play on the set of Grown Ups.

“There’s a lot of waiting around. If nothing else, patience is a virtue in the industry,” Roger said. “He looks forward every day to the set and is getting a good, positive taste of how the industry can be. He’s looking to see wherever it takes him. I may be able to open a door and guide him through, but he has to perform and do what is asked of him as an actor.”

The rewards are wonderful, he added, if you’re lucky enough to continue bagging roles and medic jobs. Dillingham said he and his son are happy to be able to do work they love and get paid for it. He shakes his head over recent news reports that some state legislators are now questioning the 25 percent tax credit program passed several years ago to entice movie production in Massachusetts.

“It’s new money to the state,” he added. “This is new money and new revenue that we didn’t have before the incentive. The revenue is in excess of $600 million the state has gotten since the tax incentive went into effect.”

Movie production boosts local economies as movie crews rent hotels, eat at restaurants and use local caterers and other businesses, Dillingham said, and that can only be a good thing for the state economy.

Powderhouse Productions explodes on to the scene