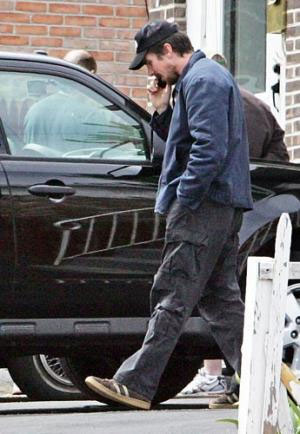 The Fighter production team started making the rounds in Lowell. Actor Christian Bale outside of Dicky Eklunds house on Wilder St. talks on his cell phone as he tours movie locations.

Tuesday morning, actor Christian Bale got into character by shadow boxing Dicky Eklund on the streets of the Highlands section of Lowell. Bale, who recently played Bruce Wayne in the blockbuster the Dark Knight, will portray the fallen Lowell boxer in the feature film The Fighter.

The half-brother and trainer of Lowell’s own “Irish” Micky Ward, played tour guide to Bale, director David O. Russell, HBO documentary High on Crack Street: Lost Lives in Lowell producer Rich Farrell and other crew members. The group bobbed and weaved up and down streets in the Highlands making stops at the former Highland Tap and Captain John’s both in Cupples Square, Eklund’s modest brick home on Wilder Street and Ramos Package Store on Branch Street.

They also took pictures outside of a few tenement-style homes on Smith, Westford and Shaw streets. At one point, Eklund, Bale and Russell began pretending to jump rope — a technique many boxers use to build endurance while training.

On Monday, actor Mark Wahlberg was spotted in the lobby of the DoubleTree Hotel in downtown Lowell meeting with Eklund and other movie crew members. The group was discussing a half-dozen or so possible locations to film scenes for the Ward biopic. Wahlberg will play Ward in what is said to be his passion project.

The movie will chronicle Ward’s boxing career from the gritty streets of Lowell and rocky relationship with his half-brother and trainer. Eklund was a promising boxer who fought Sugar Ray Leonard, but lost his fight with addiction.

Filming is set to start in Lowell this July and will take several weeks.