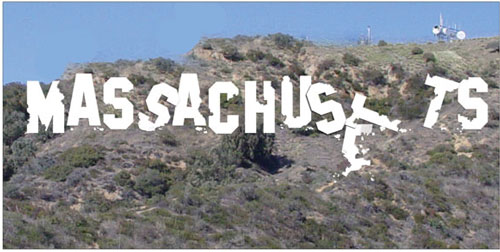 As we speak, the Patrick Administration is pumping hundreds of millions in federal stimulus cash into road and infrastructure projects across the state in hopes of boosting our sagging economy.

But at the same time, Gov. Patrick wants to dramatically scale back one of the Bay State’s most successful economic development initiatives in recent years, one that doles out tax credits to Hollywood productions that shoot here. And the timing could not be worse.

After years of learning the ropes, the Bay State is poised to finally hit the big-time, from a potential Boston-based TV series to budding plans for a studio complex in South Boston.

In an era where state and federal governments are desperately shelling out cash to create jobs, one pothole at a time, this relatively low-cost industry incentive looks like a bargain to me.

In fact, it’s a whole lot more justifiable than many of the tax breaks and subsidies the good folks on Beacon Hill have showered on all sorts of fat-cat industries over the years, mostly without much of a second thought.

“The way you get out of these downturns is to create more jobs and drive more business to the Commonwealth,” said Joe Maiella, president of the Massachusetts Production Coalition. “We see the cuts in effect capping the opportunity to create more new direct spending.”

The governor is pushing plans to cut the amount of tax credits doled out to Hollywood in half over the next two years, to about $50 million.

But in a twist that could make the cuts even more damaging, wording in the governor’s proposal could essentially make the cuts retroactive as well. That means that studios that have already shot films, but have yet to claim their credits, would have to compete for a dramatically smaller pool of dollars with productions just setting up shop in town.

You can guess what happens next – the studios that have already done work drain all the dollars, leaving nothing in the pot to lure more films to town.

That scenario has film industry boosters worried sick, with fears of a mass exodus by Hollywood just as the Bay State appears on the verge of grabbing a sizeable slice of this lucrative industry.

“You really have to be careful,” Maiella said. “This industry is mobile and it can go somewhere else, and that is exactly what we don’t want to happen.”

And there’s a lot at stake now.

As the governor pushes his cuts, a proposal for a Boston-based TV series hangs in the balance as well as plans for a movie production complex in South Boston.

The TV series would be a first for Boston since “Spencer: For Hire” in the 1980s. Landing it would be the equivalent of the Holy Grail for supporters of the state’s film industry.

And we are talking some big spenders – as much as $4 million to $5 million per episode, or about $100 million a year. If the series wins over viewers, that spending will come back reliably, year after year.

Pappas is proposing an ingeniously modest $25 million film complex, one that would start off small and grow as demand increases.

It’s financeable, and he may succeed where competitors pushing impossibly grandiose plans to build sprawling studio cities in South Weymouth and Plymouth have failed miserably.

But the Massachusetts film industry is now facing some stiff political headwinds, with tax credit critics across the country taking aim at state efforts to lure Hollywood productions. At a time of high unemployment, state programs that award tax credits to Hollywood moguls have become easy targets.

Here in the Bay State, critics have seized on a bean-counting report by the state Department of Revenue that finds a return of just 16 cents in taxes for every dollar doled out in film industry tax credits.

But the report misses the point. The tax credits were meant to bring in spending and jobs, not to pay for itself with cash for the state treasury.

On that front, they have succeeded admirably. Spending by film productions in the state soared from $71 million in 2006 to nearly $400 million in 2009. That’s a huge infusion into the local economy over four years, and does not count hundreds of millions in additional indirect spending as well. Over the same period, these productions have also created thousands of jobs.

Sometimes you have to spend a little money to make even more money.

But it’s ironic that here in Massachusetts, the land of such high public morals, there is indignation over one of the few industry tax deals that actually seems to work.

I recall the financial services and defense industries pleading and getting big tax breaks in the 1990s on nebulous promises they would keep up their local payrolls. And I distinctly recall one top financial industry player, a half a decade later, shifting much of its new employment growth to campuses in other states.

There’s also the state-subsidized convention business as well. The Boston Convention and Exhibition Center and the Hynes Convention Center cost millions in taxpayer dollars each year just to stay open, but that is seen as necessary to bring in conventioneers who will spend hundreds of millions in Boston-area hotels, restaurants and shops.

But the Hollywood productions that come here have to meet a tougher, and more logical, standard. They can only get their tax credits after they’ve shot their films, not before – and only after detailing all their local spending. No spending, no credits.

That sure sounds better than the typical corporate giveaway – and a much more sensible way of boosting the economy than paying road crews to fill potholes.