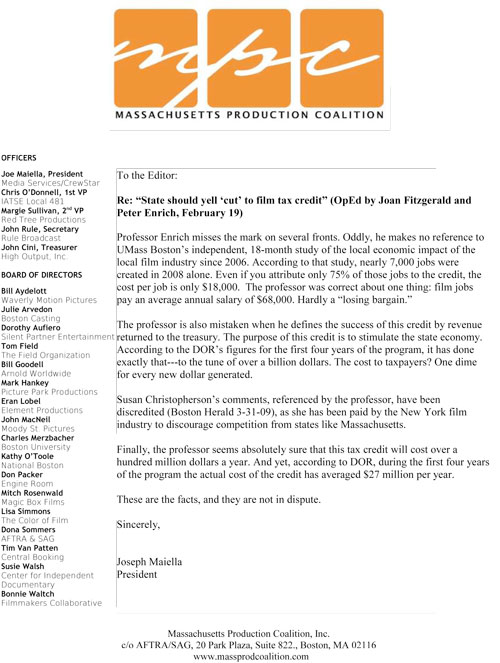 HERE IS THE FULL TEXT OF THE OP-ED PIECE WHICH IS THE SUBJECT OF THE MASSACHUSETTS PRODUCTION COALITION REBUTTAL:

IT STARTED with Canadian cities luring movie producers with subsidies when the Canadian dollar was low. Then a few US states got into the competition and the race was on. Now, Massachusetts is competing with at least 45 states in offering film tax credits, with some states paying as much as 50 percent of a movie’s production costs.

Are states benefiting from this competition? There are potentially two types of benefits – gaining new long-term jobs and a less tangible (and implausible) possibility that people who see the film will be motivated to locate their businesses and major conventions in the state.

The supposed pay-off in film employment in Massachusetts is clearly not happening. The Department of Revenue data show that, even assuming that all the jobs in the industry are entirely attributable to the credits, Massachusetts spent $94,000 in credits per full-time equivalent job with salary and benefits of about $68,000. That is a losing bargain.

Measured by the tax revenues generated by the subsidized film productions, Massachusetts only gets back about 16 cents per dollar invested. The evidence isn’t any better elsewhere. Connecticut gets an 8-cent return on the dollar, and Rhode Island reaps 28 cents. Michigan state senator Nancy Cassis puts the irrationality of the spending in perspective: “The state needs more than 20,000 small businesses, or almost 148,000 taxpayers with an income of $45,000, just to pay for the credits next year. It takes 789 individuals or 109 small businesses to fund a single star in a movie.’’

And that’s exactly what states are financing – skyrocketing marketing costs and the exorbitant pay that top stars get per film. Research by Susan Christopherson of Cornell University shows that producers are no longer employees, but subcontractors to the six major production companies – Sony, Viacom, General Electric, Time Warner, Disney, and News Corporation. As subcontractors, they are responsible for financing the production. In the pursuit of upfront cash, they play states off against each other. And states are eager to play – competing to pay for up to half of these costs, most of which go to the stars and the production companies.

The Commonwealth’s expenses can only be justified if they are creating long-term employment here in Massachusetts. But these jobs are predominantly transient. The contract workers that fill the new jobs work on a project-by-project basis and typically move on when the film is done shooting. More than 40 percent of the wages that are subsidized through the credit are paid to people who both live outside of Massachusetts and were paid more than $1 million on the project. These are not expenses that will be recycled in the local economy.

Several states are cutting back, and in the case of Wisconsin, limiting tax credits to the creation of permanent jobs. That was the rationale behind the failed attempt to provide a $50 million bonding subsidy for road, water, and sewer construction to Plymouth Rock Studios – that its $400-million complex would create up to 4,000 permanent jobs.

But the evidence on creating permanent film centers outside of New York and Los Angeles is not compelling. Toronto bought a 20 percent stake to entice Filmport to build large movie studio complex there. The $65 million facility has not attracted a single major production since it was completed in 2008.

Massachusetts expects to spend some $150 million in film credits this year, which will bring little long-term benefit to the state. That money could be much better spent on education and training, roads and bridges, and similar services that really can strengthen the state’s economy.

Joan Fitzgerald is professor and director of the graduate program in law, policy and society at Northeastern University, where Peter Enrich is a professor of law.