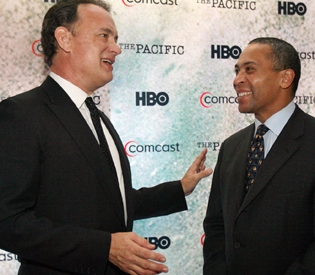 ‘The Pacific’ producer Tom Hanks meets up with fellow history buff Gov. Deval Patrick at a screening of the first episode of the HBO miniseries at the John F. Kennedy Library.

Hollywood history buff Tom Hanks made a Splash at the JFK Library last night at a screening of his latest World War II epic titled “The Pacific.”

“I became a guy in search of authenticity,” the actor/producer told the Track. “I wasn’t a fan of the stuff that was geared to us because we were stupid kids. I knew ‘McHale’s Navy’ was fake and so was ‘Hogan’s Heroes.’ ”

It was “The World at War,” a British documentary series narrated by Sir Laurence Olivier, that “changed my life,” said Hanks.

The Tinseltown teller of war stories said while watching the doc, history became more of a series of battles and map, it became human with the stories of the men who fought on the ground.

“These guys had a huge responsibility for men and they were 21 years old,” he said. “I always wondered what I would have done if I were them.” 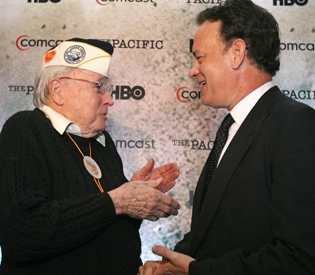 “The Pacific,” a 10-part series that begins March 14, follows the real-life journey of three U.S. Marines who fought in the Pacific Theater.

The series – which took eight years to research and develop – is based on “Helmet for My Pillow” by Robert Leckie and “With the Old Breed” by Eugene Sledge.

Before the screening, Hanks met up with Gov. Deval Patrick after charming a legion of local World War II vets who were quite proud to be feted by such a superstar.

The gov told us he became fascinated with the war through the stories of his father-in-law, who lied about his age – and race – to enlist in the U.S. Navy.

“He didn’t want to be stuck in the galley,” he said. “He was a mine sweeper. It goes to show the patriotism of the times.”

The governor said he told Hanks that “The Pacific” is a “wonderful thing” he’s done “to honor the service and sacrafice of that generation.”