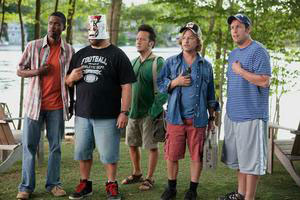 Essex — As the camera pans away from a restaurant on a quiet country road, a sign is visible above the entrance: “Woodman’s.”

The scene is the end to the movie “Grown Ups,” filmed in Essex last year and premiering today nationwide, and the town’s involvement in the production has brought pride to Essex and thrust the community into the Hollywood spotlight.

After a long wait, the small town is anxious to finally see the finished product – mostly to spot people they know playing bit parts, or places they’ve grown up with being featured on the silver screen.

“Grown Ups,” starring Adam Sandler and an ensemble cast including many other former “Saturday Night Live” cast members, came to Essex last spring and did the majority of its filming on location on Chebacco Lake, with Centennial Grove used as a Connecticut lake house visited by Sandler’s character, four of his childhood friends and their families.

A group of about a dozen local merchants who were involved with the production were invited to attend a reception and preview screening on Thursday night at the Regal Fenway Cinemas in Boston. The fifth generation of the Woodman family planned to serve the restaurant’s chowder to moviegoers and give away over 400 coupons for Gifford’s ice cream, and The Farm Bar & Grille was also scheduled to provided some catering.

“We have a very strong fifth generation, and they are all workers for (for the premiere),” Woodman said. “They will be talking about this for
many years. I think it’s a great piece of history.”

The cast and crew’s presence on Cape Ann was felt throughout last summer, both financially and as a cultural boost. The town was paid $150,000 for the use of Centennial Grove from Lakefront Productions Inc. and received another $500 daily from September until November to keep the site untouched in case re-shoots were necessary. Many of the sets were decorated with pieces from Essex’s antique shops, and regular celebrity sightings around town created a buzz that lasted long after the crews left town.

“We estimate the financial impact package to the area to be around $1 million,” said Bob Coviello, owner of Main Street Antiques and leader of the Essex Merchants Group. “As an industry, it was very smart for the production company to spend money locally and be visible in the community in a positive way.”

Coviello said other communities were courting the production as well, and the process was competitive. He commended Selectmen Ray Randall and Jeff Jones and former Selectman Mark Lynch, who left the board in May, for pushing to bring the film to Essex.

“It’s another thing that makes Essex come alive, that makes us more interesting than the next place,” he said. “When you weighed it out, the benefits of filming the movie here were 100-fold over not having it … it probably allowed Essex to avoid a tax override.”

Sue Lufkin, chairman of the Essex Division of the Chamber of Commerce, said business returned to normal around town after the production completed filming, but the year-long wait may give Essex a much-needed boost with its release.

“It will be interesting to see if there’s an uptick after the movie comes out,” she said. “That’s a whole other level of it that we would assume
we’d have.”

Randall said the impact of the movie on Essex after the premiere will likely be more cultural than financial, with most of the funds generated from the production coming during the 2009 filming.

“The impact from the movie premiering and production of the movie will differ,” Randall said. “After the movie comes out, we’ll get recognition and there will be curiosity. That will cause people to visit Essex, perhaps come to our restaurants, try to get to Chebacco Lake and see the cottage that appears in the movie.”

Woodman said many big-name Hollywood companies and television networks have contacted the business, and The Food Network will film at Woodman’s on July 13-14. Additionally, commercials and promotions were shown regularly throughout the NBA Finals earlier this month, and advertisements ran on the in-game scoreboard on the screen.

When contacted by someone from the reality program “World’s Strictest Parents,” Woodman asked what relevance the restaurant had to the show and why they would want to film there. “(The producer) said, “everyone in Los Angeles knows Woodman’s, and they’re talking about you,” Woodman said. “All the things that have been on television so far, especially since the Celtics were in the Finals and they took the scoreboards over for promos, it has all had a huge impact.”