The guru of toughness 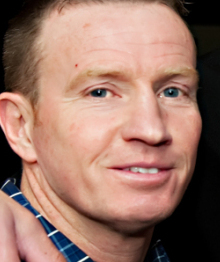 WHAT IS IT about “Irish’’ Micky Ward, the retired light-welterweight boxer from Lowell, that draws men to him in the hope that some of his old-school tough-guy virtue will rub off on them? It’s not because they all want to learn the secret of his left hook to the body, and it’s not because he’s so charming or clever or in such fabulous shape. It’s certainly not because he won all the time. He never held a major title, his career record was 38-13, and he lost two of his three most famous bouts, a trilogy of brawls with Arturo Gatti in 2002 and 2003 that looked like Popeye cartoons, only more eventful.

But the wars with Gatti raised Ward, who never gave up his day job on a paving crew, to the status of a regular-guy icon who is respected, even revered, throughout the fight world and beyond. He’s a guru of toughness, celebrated in song (by the Dropkick Murphys, among others), in story (in the forthcoming Hollywood biopic “The Fighter’’), and where it really counts these days when it comes to violent immortality: on the cover of the video game “Fight Night: Round 3.’’

Acolytes come to Ward because he’s known to have heart in heaping quantities. They want an infusion of the courage, will, and workmanlike persistence that kept him grinding out the punches even when beaten bloody. That those qualities are among the most difficult to transfer doesn’t discourage the acolytes. Young fighters wish to soak up his essence, of course, but so do Mark Wahlberg, Christian Bale, David O. Russell, and the rest of the Hollywood types who made “The Fighter.’’ And now comes Mariusz “Dominator’’ Pudzianowski, all the way from Poland.

Pudzianowski needs help, even if it’s just symbolic help. He’s the five-time winner of the World’s Strongest Man contest and he looks like an overinflated anatomical doll, but he’s coming to Ward because he wilted so badly in a mixed martial arts fight that his handlers are afraid people will think he’s a joke. A press release from Pudzianowski’s promoter, the Korean company Moosin, says that Pudzianowski will come to Massachusetts later this month to get pointers in boxing from Ward. But you don’t go to Ward to learn advanced technique, and there’s not much body punching in MMA. Moosin is sending the 270-pound Pudzianowski to Ward, whose prime fighting weight was around 140, to signal that he’s serious about getting tougher.

That’s necessary because of the character of the drubbing Pudzianowski received at the DCU Center in Worcester in May. It was only his third MMA bout, against Tim “The Maine-iac’’ Sylvia, a faded veteran. Moosin intended that Pudzianowski would earn instant credibility by overwhelming Sylvia with raw strength. Serial paydays courtesy of Dominator’s rabid Polish fan base would follow.

But the plan blew up. Pudzianowski started out all right, but he quickly spent his energy. Soon he was exhausted, flushed and gasping, backing away with a panicky look in his eye. Pudzianowski tapped out — surrendered — when Sylvia got on top of him and began punching him in the head. There’s no shame in losing, especially when inexperience and poor conditioning are to blame (Pudzianowski also claimed to have hurt his ankle early in the fight), but Dominator submitted so abjectly that even the chanting fanatics wrapped in Polish flags at ringside might well have given up on him.

So Moosin has announced that Pudzianowski will study wrestling with former All-America grapplers and learn about boxing from Ward, even though the real point of sending the disgraced cash cow back to Massachusetts is to borrow some of Ward’s aura. Dominator joins a motley parade of such seekers after local mojo.

An odd wrinkle in the globalization of popular culture has given Massachusetts a certain currency as a place where traditional forms of masculine virtue still thrive. Movies have played a key role. The state’s efforts to attract film production, especially the film tax credit, have enabled a string of movies — “Mystic River,’’ “The Departed,’’ “Gone Baby Gone,’’ “Edge of Darkness,’’ and, next up, “The Fighter’’ and Ben Affleck’s “The Town’’ — that glorify white-ethnic (usually Irish) styles of toughness associated with working-class neighborhoods in places like Boston and Lowell. Native storytellers like Affleck, Wahlberg, and Dennis Lehane are responsible for this lionizing of Boston-area regular guys, but so are internationally prominent mythmakers from elsewhere like Clint Eastwood, Martin Scorsese, and Mel Gibson. With the help of local casting consultants and dialogue coaches, they come here, of all places, to get some of that potent homegrown stuff.

Ward is widely recognized as a rare surviving exemplar of the real thing on which the best-selling violent fantasies are based, so it makes a certain kind of sense that Moosin is sending Pudzianowski to sit at his feet. It’s not likely to make much of a difference in how the guy fights, but it may well work as public relations. Humiliated by one New Englander, Pudzianowski will rehabilitate his reputation by associating with another. Dominator probably won’t learn much boxing technique while he’s in town, but he might start wearing a Red Sox cap while washing down a spucky with a drink from the bubbla — which will of course prove that he’s ready to headline another fight card sometime soon.

Carlo Rotella is director of American Studies at Boston College. His column appears regularly in the Globe.