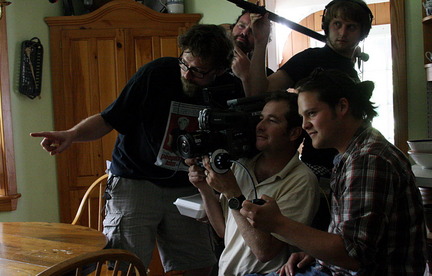 Photo by Jeff Brown
Director Lucky McKee instructs cameraman Alex Vendler, center, and Matt Abraham, in the filming of “The Woman” in Greenfield Friday. Sound man Kyle Porter is in the background.

Several images come to mind at the mention of the Greenfield-Turners Falls area, but not the eating of human flesh. Not until this month, at any rate. The production company Moderncine has spent the past four weeks in mostly remote parts of Greenfield and Montague shooting the movie “The Woman,” and some of the scenes are not for the faint of heart or the weak of stomach.

A sequel to the 2009 film “Offspring,” “The Woman,” according to the movie’s website, is about the last surviving member of a feral clan that has roamed the Northeast coast for decades. After the rest of clan gets killed by law enforcement in “Offspring,” “the Woman finds herself alone, severely wounded … and vulnerable,” according to the plot description. Photographs on the site show the title character dirty, bloody and mostly naked.

Crews were finishing shooting in the area this weekend. Producer Andrew van den Houten, who has been on location for the shooting, dislikes the word “cannibalism” and bristles at the suggestion that “The Woman” is a gross-out movie, preferring to call it “a psychological thriller.”

“It’s all about what the characters are doing,” he said. “It’s a psychological study of a very disturbed man and his family.”

That would be Christopher Creed, a local hunter, country lawyer and “seriously disturbed family man.” In the movie, Creed captures the Woman and tries to “civilize” her, “a decision that will soon threaten the lives of Creed, his family and the Woman.”

Van den Houten did not want to be more specific about the climax, saying only, “She definitely has her way with some of the characters.”

Originally scheduled to be shot in Michigan, where “Offspring” was made, “The Woman” changed its location to Massachusetts when the Michigan Film Commission declined to grant the producers tax credits. Although news reports quoted Michigan film commissioner Janet Lockwood saying “The Woman” was “unlikely to promote tourism in Michigan or to present or reflect Michigan in a positive light,” other officials there said the main concern was financing for the film, not gore. Van den Houten called the notion that “The Woman” was bad for Michigan “cockamamie (expletive).”

“I drove around Michigan and I didn’t see any cannibal sightings on the side of the road,” he said, “so I don’t know how we impacted tourism.”

Lest it be implied that activities such as those in “Offspring” and “The Woman” take place in Michigan or Western Massachusetts, it should be noted that the movie is nominally set in Maine.   A graduate of Boston’s Emerson College, van den Houten, 30, already has a variety of films to his credit. He described his next project, “Rising Stars,” as a family movie about three filmmakers.

Both “Offspring” and “The Woman” are based on novels by Jack Ketchum and directed by Lucky McKee, whom van den Houten compares to Stanley Kubrick. With the success of movies such as “Saw” and “Friday the 13th,” van den Houten believes “The Woman,” though low budget, can be a big hit.   “I think it can be widely received,” he said.