THE CARPETBAGGER: Behind Camera, Checking the Ego 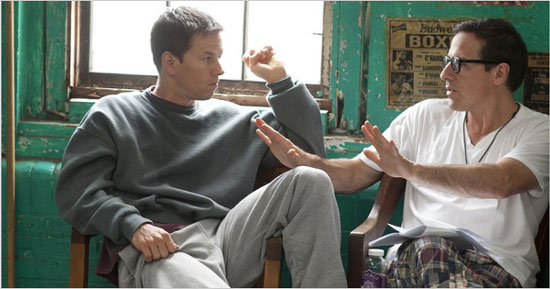 Mark Wahlberg, left, with David O. Russell on the set of “The Fighter,” which will open in limited release on Friday. (Photo by Jojo Whilden/Paramount Pictures.)

David O. Russell does not have the reputation of an evenhanded filmmaker. Depending on whom you talk to, Mr. Russell, whose work includes the Persian Gulf war satire “Three Kings” and the existential corporate comedy “I Heart Huckabees,” is quixotic, combative and occasionally brilliant.

For his latest film, “The Fighter,” a passion project brought to him by his frequent star Mark Wahlberg, Mr. Russell takes on the true story of Micky Ward and Dicky Eklund, brothers and struggling boxers from Lowell, Mass., near where Mr. Wahlberg grew up. He plays Micky, the quieter but more successful of the two, and Christian Bale, in an outsize, twitchy performance that is generating Oscar talk, plays Dicky, a recovering drug addict and a wiry charmer.

The film, which opens in New York, Los Angeles and Boston on Friday, is set in 1993 and focuses on several fights, which Mr. Russell filmed in period style, using the same cameras and cameramen that HBO did when it broadcast them. In an interview at the Four Seasons restaurant in Manhattan, Mr. Russell spoke about his technique, his career, and why surviving a few rounds in a boxing ring is good preparation for Hollywood.

These are excerpts from that conversation, a longer version of which can be found on the awards season Carpetbagger blog.

Q. The film opens with a documentary-style interview with Micky and Dicky that exposes their relationship, but that wasn’t in the original script?

A. [It was] a discovery in the editing room. We had no time in the schedule. You shoot these interviews as you go, throw them in the frames: Tell me about this. Talk about this.

Q. It was totally unscripted?

A. We had worked on the characters. Christian was in character nonstop, and Mark, coming from the John Garfield school, is always kind of in character, because it’s always him in some way. I pretend to be the HBO interviewer, and I would say, tell me when you started fighting. Then Christian would go down the road, and then I would say, no, say this.’ I would just start throwing lines at him that we would make up on the spot, and we got that gold where he cried at the end. That’s like a cinematic haiku.

Q. Tell me about working with Christian. He has a reputation as an intense actor.

A. Christian is a serious guy, and by that I mean he’s a sincere guy, so when he commits to something, you can feel how much sincerity there is. And we both talked about wanting to come from a place of love for Dicky, that’s what made it interesting. We had to figure each other out the first couple of weeks, but once we found a rhythm we were very, very comfortable. He does his thing. He goes off to his workshop, and he comes back with his shaved hairline and his bones sticking out.

He listened to the music of Dicky and the movement of Dicky. Dicky is basically a black guy, like a Muhammad Ali type of black guy who never stops moving and talking, which was very liberating to Christian because he is a very quiet person. And then there was a question of calibrating it. He came out of the gate with his creature, and I would have to say, you’ve got to bring it down a little bit, and it’s a matter of trusting me, understanding that you’re still very much Dicky, you’re just a little too big right now. Ideally in any director-actor relationship that’s what you want: Is this too much? Is this too little?

Q. Mark trained for four years to play a boxer, and you shot all the fight scenes in just the first three days. How did you choreograph them?

A. We picked our rounds that we loved of Micky’s fights. We would have them up on YouTube while we were shooting and I’d go, ‘Wait, look, that isn’t exactly right.’ We had to make sure we had the angles for the right hits. We had 79 hours of footage for only three days. We still had more footage than we knew what do with, so the real job was to find the most dynamic rendition and cinematic rendition of the drama of these particular fights, each one very different.

Q. You shot on location in Lowell, in a blue-collar community, and you depict drug addiction and crime. How do you avoid moralizing in that context?

A. I think the tone is really set by the real people themselves, because the way they take that stuff in stride is how the film needed to take it in stride. Meaning it’s been part and parcel of their lives for a long time, going back to their uncles and their fathers, they’re all in and out of jail. Micky Ward’s dad was in jail with Mark’s dad. That’s how they are. They’re beautiful, big-hearted people, you would think they were venal in some way and they’re not. They talk about it in an unflinching way just the way they take a punch.

That’s the most beautiful thing that I like about boxing: you can take a punch. The biggest thing about taking a punch is your ego reacts and there’s no better spiritual lesson than trying to not pay attention to your ego’s reaction. That’s what takes people out of the fight half the time. They get hit and half the reaction is your ego is saying, I cannot believe that person just lit me up, how humiliating. And what a fighter has to do and what Micky does and what these guys do, whether it’s a prison thing or a crime or a drug episode, is they kind of just go. [He mimes ducking and getting up.]

Q. Let me ask you to draw a parallel between being able to take a punch and your career as a filmmaker. You’re no stranger to difficult shoots and things that have battered your reputation. [An altercation with George Clooney on the set of “Three Kings,” for example.] Is that part of your interest in learning how to bounce back?

A. Absolutely. That’s where you really have to show what your character is. That’s why I love Bill Clinton. I just love people who can take a punch and pick themselves up and come back. That’s why I found Micky so inspiring, and Dicky. I had a few humbling years and those years made me a better filmmaker. I write better now, and I see better now cinematically. There’s a lot less deliberation and more instinct and ‘get to it, Jack.’ Cinematically, your hunger gets deeper. This shoot was not a hard shoot, as short as it was, because we’re all grateful to be there, me, for all the reasons I’m telling you right now. I loved the people, I almost wish there was a TV series that we were still shooting. I like being with those people because they know how to live. They are the roofers and the pavers, they’re very alive and very unpretentious and very open.

Q. Unless you’re an interloper.

A. That’s where Mark helped. Mark is from almost virtually the same family of nine children [there are nine children in the Ward-Eklund clan], and so that helped a lot, and also I was an organizer up in those parts before I became a filmmaker. I was a community organizer for housing projects in Lewiston, Me., which is very much like Lowell, and in the South End of Boston. My first films were documenting housing conditions and the people in them in Lewiston in the early ’80s and the same thing then in the South End of Boston for Central American immigrants, writing about people who are getting racially harassed in south Boston, probably by Mark and his friends. It was coming up on the time when Mark went to prison.

Q. A lot of your other films are satirical, and here you’re really striving for authenticity in everything from the camera work to your depiction of the characters. Is that a change that you will continue?

A. I think for sure. You can’t go wrong. It’s really, really simple. The closer you stay to emotional authenticity and people, character authenticity, the less you can go wrong. That’s how I feel now, no matter what you’re doing.

‘The Fighter’ packs a punch