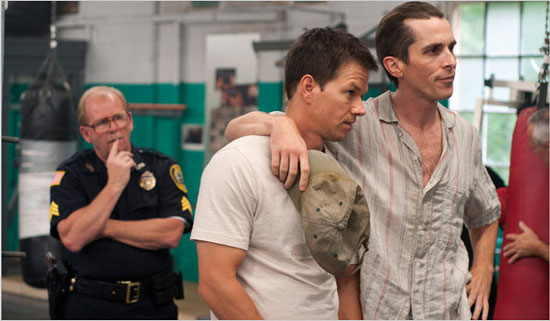 With the possible exception of the romantic comedy, no film genre is more strictly governed by conventions — or enslaved by clichés, if you prefer — than the boxing picture. Something similar might be said about reviews of boxing pictures, so here goes:

“The Fighter,” directed by David O. Russell and based on the true story of the junior welterweight Micky Ward, is quick on its feet and packs a mighty punch. With solid bodywork, clever feints and tremendous heart, it scores at least a TKO, by which I mean both that it falls just short of overpowering greatness — I can’t quite exclaim, “It’s a knockout!” — and that the most impressive thing about it is technique.

By the time this film — which was written by Scott Silver, Paul Tamasy and Eric Johnson, and shepherded into existence by Mark Wahlberg, who plays Mr. Ward — reaches its rousing and brutal final rounds, it may feel a bit familiar. Not necessarily because the story of Mr. Ward’s career is so well known (his most famous bouts, in particular his three extraordinary meetings with Arturo Gatti in 2002 and 2003, do not fall within the movie’s scope), but rather because the shape of the narrative recalls so many other fight movies.

This is yet another tale of an underdog battling long odds and stubborn adversity in search of a shot at the big time. It is also a love story, a family melodrama and the chronicle of a close and complicated fraternal relationship. The love of a good woman (the unaffectedly lovable Amy Adams), the rivalry and camaraderie between brothers, the battered face, bruised knuckles and wounded pride — “The Fighter” has it all.

But the inevitable comparisons arise only in retrospect, when it settles down into the company of “Rocky” and “Raging Bull” and other very good (and Best Picture-nominated) boxing pictures. Mr. Russell, a restlessly — sometimes recklessly — inventive filmmaker, does not try to subvert the genre, but rather, as Clint Eastwood did in “Million Dollar Baby,” to refresh it, to find new insights and angles of vision within the parameters of the tried and true.

Sticking fairly closely to the facts of Mr. Ward’s story, “The Fighter” also plants itself firmly in his native terrain of Lowell, Mass., immersing the viewer, especially in early scenes, in the sensorium of a hard-luck industrial town left to languish in the backwash of globalization. The voices of the citizens are angry, irreverent and profane. The light is flat and unlovely. You can almost smell the weariness and desperation rising off of the tar that Micky, in his day job as a road paver, spreads on streets lined with sagging three-decker houses and faded storefronts.

A city with a distinguished place in American labor and literary history — it was the birthplace of Jack Kerouac — Lowell in the early 1990s, when “The Fighter” unfolds, is blighted by poverty, unemployment and the crack epidemic, which has claimed Micky’s half brother, Dicky Eklund, as a casualty.

This last bit of information emerges piecemeal, through a scrim of family denial and addict dissembling, but as soon as we see Dicky, played by a gaunt and antic Christian Bale, we know something is wrong. His eyes dart, his mouth draws back into a nervous rictus, and his shuffling, splayed walk conveys neurological damage. Dicky is also amusing, sensitive and quick witted, a ball of comic charm able, just barely, to juggle his addiction with his commitment to his brother and their mother, Alice (Melissa Leo).

Mr. Bale’s performance is astonishing, in part because he so completely conquers a daunting set of physical and psychological challenges. Dicky is not only an addict but also an athlete in his own right, a former boxer who clings to, and endlessly relives, a single moment of glory. He tells everyone who will listen that he once knocked down Sugar Ray Leonard, and while the facts of the episode are in dispute, his pugilistic skill and intelligence are never in doubt.

In a crucial scene, having attempted a remarkably stupid caper, he finds himself fleeing the Lowell police, his long limbs flapping like a cartoon character’s as he high-tails it down the street. Then, as Dicky stops and squares off to throw an ill-advised punch, he snaps suddenly from clown to gladiator. You see that his core of talent and discipline has not been completely destroyed by drugs, even if his judgment and self-respect have. You also see that this funny, exasperating character is really a walking, flailing tragedy, for himself and just about everyone around him.

It is this rhythm — the light, syncopated footwork of comedy setting up stinging jabs of pathos — that makes “The Fighter” so lively, so surprising and so moving. At least since “Flirting With Disaster,” his breakthrough comedy from 1996, Mr. Russell has exhibited a bracingly kinetic directing style, for better and for worse: “Three Kings” flies like a bullet aimed at the contradictions of American global power, while “I Heart Huckabees” spins manically like a hamster’s wheel, blurring its provocative ideas into tiresome intellectual attitudes.

Mr. Russell came late to “The Fighter,” hired on after other directors had fallen through, and the project seems at once to have unleashed and reined in his extraordinary energies. He and the cast are confident enough to plunge into the richest contradictions and deepest complications of Micky Ward’s life and milieu. (The Ward-Eklund family cooperated with the filmmakers, and one of their friends, Mickey O’Keefe, plays himself on screen.)

The American working class, in its Northern and Southern Caucasian manifestations, tends to be portrayed in movies either with glib mockery or with an equally condescending solemnity. Micky and Dicky and their clan — seven sisters and that powerhouse of a mother — are vulgar, vicious, loyal, hilarious and a hundred other things, that is, entirely and sometimes embarrassingly human. To say that this family is dysfunctional would be both to understate its troubles and to narrow the film’s scope, which encompasses ethics, sociology and economics as well as psychology.

Alice, flanked by those seven Fury-like daughters — and occasionally, weakly challenged by her husband (Jack McGee) — stands out in an increasingly crowded field of monstrous movie matriarchs. (See also Mo’Nique in “Precious,” Barbara Hershey in “Black Swan” and Mother Gothel, voiced by Donna Murphy, in “Tangled.”) She and Dicky, her obvious favorite, are supposedly supporting and promoting Micky, but they always seem to undermine his chances for success, which may be their deeper intention. He can never be allowed to surpass his brother, or to think that he’s better than the rest of the family.

And “The Fighter,” while it persuasively details Micky’s travails in the ring, is more centrally about the fight between Alice and Charlene, his girlfriend, over control of his destiny. Ms. Leo, smoking and raging, as if preparing either to burn Lowell down or kick it to pieces, is a formidable presence, but she is matched by Ms. Adams, whose soft, sweet features disguise a will of steel. The best and hardest punch in a movie full of flying fists is thrown by her.

Mr. Wahlberg, for his part, leans back against the ropes and watches, underplaying so gracefully and with so little vanity that you almost forget that the movie is supposed to be about Micky. Everyone else seems to do a lot more fighting than the ostensible title character. But the brilliance of Mr. Wahlberg’s quiet performance is that it so effectively mirrors the deep logic of the story, which is finally about the paradox of a man in a violent profession who is fundamentally passive and who must learn how to find some distance from the people who love and need him the most without abandoning them or betraying himself.

“The Fighter” is rated R (Under 17 requires accompanying parent or adult guardian). It has violent boxing sequences, drug use, obscenity and a bit of sex, though not enough to sap its strength.