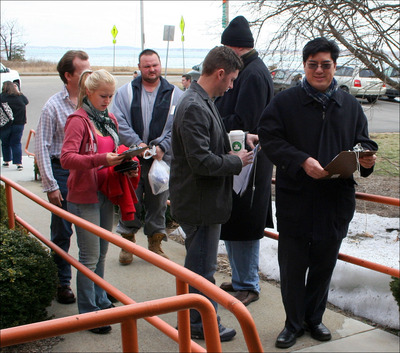 QUINCY-The casting call for Quincy locals to appear as extras in the new Kevin James movie “Here Comes the Boom” drew about 800 hopefuls ranging from government officials to the unemployed.

By 11 a.m. Saturday, more than 350 residents of the city had filled out contact forms and seen casting agents to win one of the 8,000 parts needed for extras for the film, all of which are paid positions. The movie will be filmed in the old Quincy High School as well as locations around the city.

According to Mark Carey, whose jobs include co-director of the Quincy Chamber of Commerce and executive director of the Quincy Film Bureau, approximately 35 percent of a group of 80 auditioners admitted to being unemployed. As such, filming in Quincy has real benefits — not just for the restaurants, hotels, and retailers that will cater to cast and crew, but for the residents as well

According to Chan, the movie’s benefits have made the film a strong priority for the city. Coughlin agreed.

“We’re trying to send the message out that we’re welcoming and inviting to other ventures that will benefit the people who live here,” Coughlin said. “[This movie] has a trickle-down effect that will benefit hundreds in the city.”

Wahlberg makes his mark in Swampscott