Movie business is thriving in Massachusetts 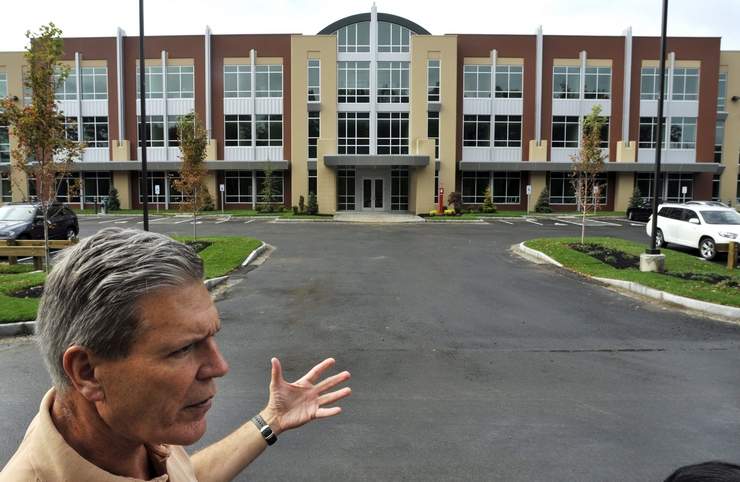 DEVENS — The future of Massachusetts’ television and film industry may lie in four very large rooms off a quiet wooded road in the former Army base at Devens.

The space is empty now, but it could one day host the next hit TV series or superhero action flick.

These rooms, which make up a $36 million complex called New England Studios, are the first large-scale soundstages built in Massachusetts, and the only ones for hundreds of miles around. Another production facility is slated to open in Worcester by the end of the year. These represent what promoters of the state’s film production industry say have been missing.

Since the state started subsidizing the industry in 2006, producers have flocked to Massachusetts to shoot on location. But except for a few less-than-ideal warehouses, they have not had a place to build sets and film scenes indoors.

Lisa W. Strout, director of the Massachusetts Film Office, called the construction of New England Studios a milestone for the state’s production industry.

“It’s a game-changer for Massachusetts,” she said. “Rather than getting half of a movie, we can accommodate productions that have large set builds. It means a lot more chance to work year-round.

“It’s a signal of no longer being in our nascent stage,” she added. “We’ve moved into the next phase of development of film and media here.”

Massachusetts doled out $36.5 million in tax credits to the production industry last year, from big feature films to TV commercials. By far the biggest chunk — $26.6 million — went to “R.I.P.D.”, a big-budget film that later flopped at the box office. Another $1.8 million went to “Gilded Lilys,” a pilot shot in Worcester that never made it to television.

Companies that produce at least half their projects in Massachusetts receive credits equal to 25 percent of their costs. This, combined with a sales tax exemption and payroll credit for big projects, makes Massachusetts one of the production-friendliest states in the country.

Worcester has had its time in the spotlight, most recently during the filming of the star-studded “American Hustle,” a movie directed by David O. Russell. The HBO miniseries “Olive Kitteridge” will shoot for one day in the city later this month.

Tax incentives mean millions in lost tax revenue for the state, but by drawing productions here, the incentives also spur new spending. A study from the Motion Picture Association of America found that the $37.9 million in tax credits issued in 2011 helped support 2,200 jobs and $375 million in spending. The study also showed that film activity plummeted in 2010 after lawmakers considered capping the tax credit.

Most states offer some kind of film tax credit, but incentives alone are not enough to grow the film industry. Producers also want a variety of places to shoot, a capable workforce and studios where they can build sets. It’s what industry promoters call the “whole package.”

The Devens complex, which opened last month, includes four soundstages, consisting of 18,000 square feet each. It’s nearly 50 feet from the floor to the wooden grid above, where crews will work on lighting and sets. The four studios, divided by enormous sliding doors, can be used separately or together. The walls are soundproofed with concrete and special insulation. The floors allow sets to be nailed into the ground and removed. There is also ample space for hair, makeup and costumes.

Only a few other states offer this type of production facility. They include the movie meccas of California and New York, as well as New Mexico, Georgia and North Carolina. Some Canadian cities are also favorites for the film industry.

Just half an hour away from Devens, on Pullman Street in Worcester, an effort is underway to transform three buildings, once used for building railcars, into a production facility. The biggest building, at 125,000 square feet, is slated to open in December, and two film producers are already interested in renting the space, said Barbara Guertin, actress, founder and managing director of Pullman Project LLC.

“Our dream and vision is to upgrade and make this the most accommodating film studio on the East Coast,” Ms. Guertin said.

She doesn’t see the Devens complex as direct competition.

“They’re gearing toward the $20 million film and above,” she said. “We are not gearing it to any particular group. We are open for video game makers to independent filmmakers to music videos. Across the board, we are going to be much more versatile — and we’re also going to be a great deal less expensive.”

Anton Nel, the developer of the Worcester project, has also expressed interest in building a production studio in Westboro.

Massachusetts has the potential to become the Northeast hub for film and television production, according to Nicholas Paleologos, who led the Massachusetts Film Office until 2010 and now runs the New Jersey state arts council.

“There is an ample amount of spending to go around,” he said. “New York and Los Angeles are never going to soak it all up. The question is, ‘Is there another $300 or $400 million a year in spending that a state like Massachusetts could capture, if we only tried hard enough?'”

Movies may be glamorous, but TV shows pay the bills. Chris Byers, director of operations and marketing for New England Studios, is working on both fronts.

“We’re definitely looking at television,” he said. “We’re looking at features. I think television is a great fit because of the duration it shoots for. Hopefully, you get a series in here that shoots for five, six, seven, eight, nine years. Our goal is to keep the studio busy, which keeps local employment busy.”

Mr. Byers, a Lowell native, spent 29 years in film production in California and other places, and now he’s relying on the relationships he’s built over the years to help him draw business to the Devens studios.

“The beginning of next year, I think we’ll see the big features start to come here,” he said.

New England Studios was funded by private equity investors. The project was offered a property tax break by the state agency MassDevelopment, which oversees Devens. Developer Michael J. Meyers decided not to accept the tax increment financing deal, but he has made it clear that this project would not have been viable if not for the state subsidies for the production industry.

Previously a hotel developer, Mr. Meyers has a lot of confidence in the project because he visited a dozen other studios to learn about the industry and knows what he’s up against.

“Ours is really cutting edge,” he said.

Construction of New England Studios involved 640 workers. A handful of employees are keeping the facility open these days, but each production that comes to the studio could hire dozens or even hundreds of workers, from makeup artists to grips to sound technicians.

Mr. Meyers owns or has options on almost 50 acres of land in Devens. There is plenty of room to expand the studios — if there is enough demand.