From Chinatown to the Financial District.

In case you missed it, the majority of the new Ghostbusters reboot—though it takes place in New York City—was filmed in Boston.

The very first trailer for the movie, starring four lady leads, Kristen Wiig, Melissa McCarthy, Leslie Jones, and Kate McKinnon, came out last week. Now, a new international trailer for Ghostbusters (above) has hit the web, and if you’re any sort of Bostonian, you’ll surely recognize some signature spots from around the city.

Here, a guide to the Boston locations we found in this trailer, in chronological order.

It looks like the filmmakers did some digital remastering on Oliver Street (see below). A July 2015 report from Boston Business Journal said the movie actually closed down Oliver, Milk and Batterymarch—that whole block in the Financial District, save for Franklin Street—for a shoot.

Here, you see the Langham Hotel’s red overhangs have been changed to blue, and the parking garage was altered to be an office space with retail on the ground floor. Looks like they did keep the window graphics from Tossed, the salad spot on the corner of Milk and Oliver Street, but toned down the green color. 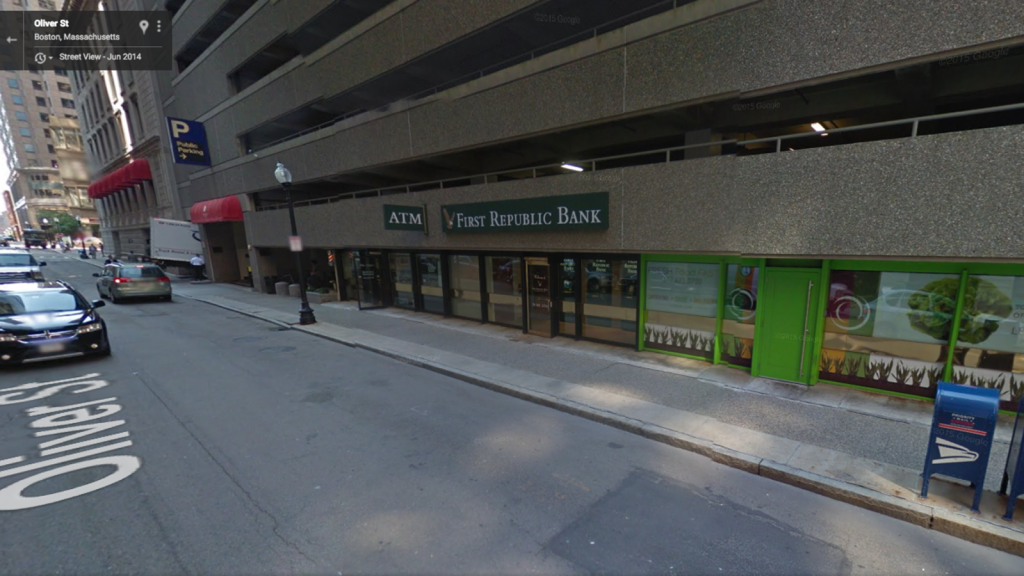 That door Kristen Wiig’s character approaches is outside the Yawkey Center at Emmanuel College in Fenway. The campus was set up to double as New York City’s Columbia University, according to People.com.

The exterior of the restaurant, on the corner of Harrison Ave and Essex Street in Chinatown (see below), was made over to be “Zhu’s Authentic Hong Kong Food.” The trailer alludes to the new Ghostbusters’ headquarters being based here. 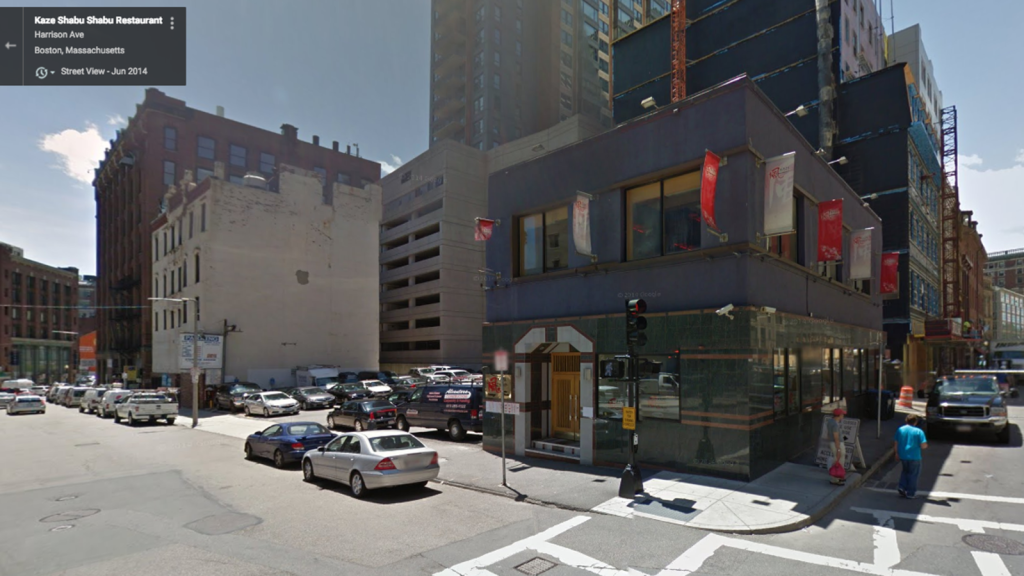 This shot also appears to have been remastered. The Ghostbusters are, uh, ghostbusting in front what appears to be Santander Bank on Federal Street (see below). It looks like the filmmakers, though, turned the Rockpoint Group building on 75-101 Federal into some other retail or business space. Here’s a liveshot of the production set up on 100 Federal Street (the base of Boston’s famous Pregnant Building) right across the street from Santander. 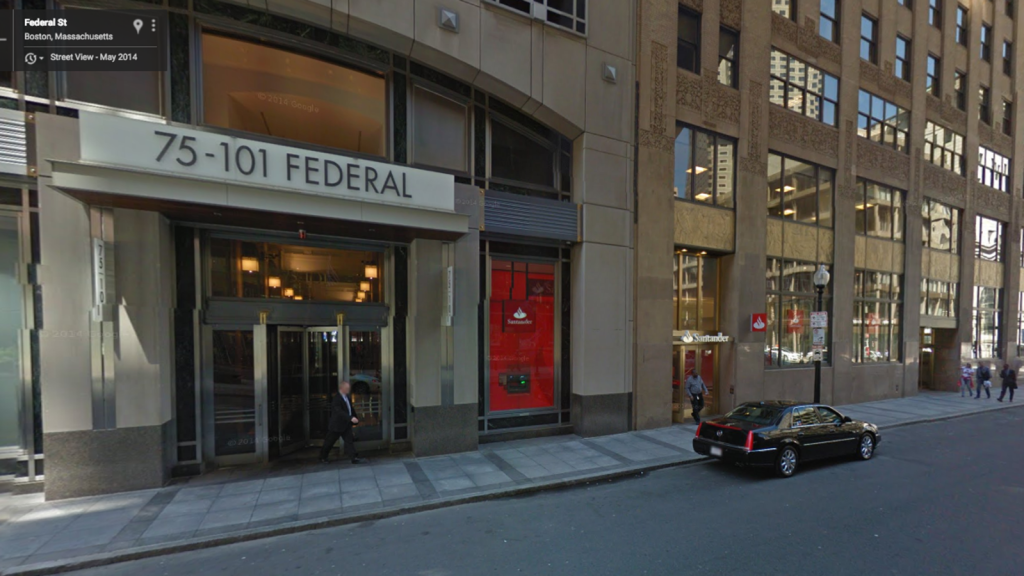 Ghostbusters filmed a big concert scene at the Wang last July. They held an open casting call for older people who looked like metalheads to play the audience in the sequence.

The studio built a 35,000-square-foot soundstage (see below) on the runways of the former air naval base located 12 miles outside of Boston. It was used to construct a replica of New York City’s Times Square, which you can make out in the birdseye image below. You can also check out the stage from all angles on Google Maps here. 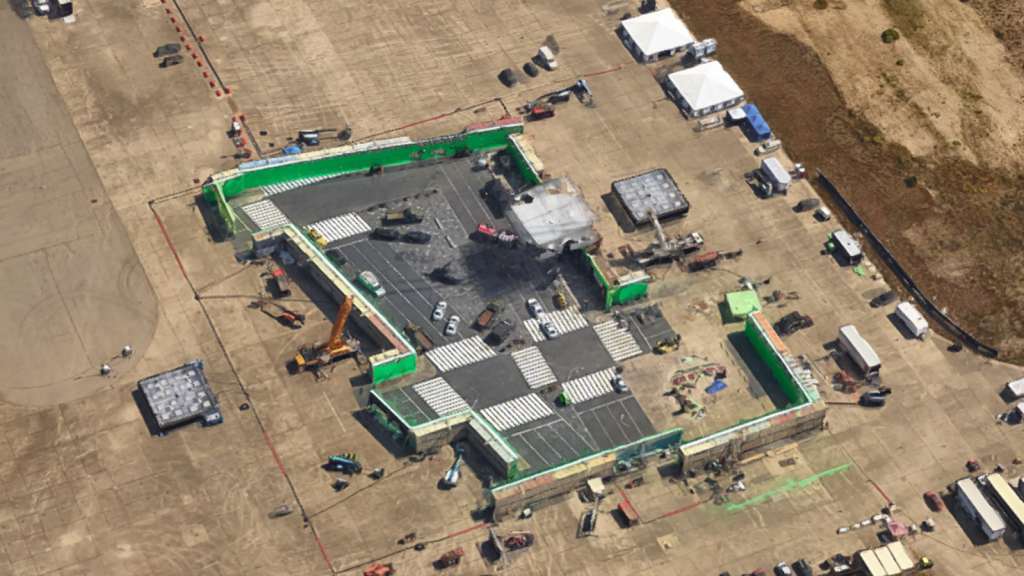 Though this definitely resembles the inside of the Green Line tunnel with the ground-level tracks—specifically, like Boylston Street Station with the attributable curve in the route—it’s actually not. MBTA spokesperson Joe Pesaturo said the movie’s location manager certainly took a tour of Boylston Street Station, but filmmakers decided to build their own set for the subway scenes.