By Karen B. Bento
edibleBOSTON

When Louisa May Alcott sat down at the small, wooden “shelf desk” her father built especially for her in her bedroom at Orchard House in Concord, she probably devoured a few crisp apples as she feverishly penned her novel, “Little Women.”

One hundred fifty years ago, it was impossible for Alcott to know that this holiday season families would be flocking to movie theaters to see writer and director Greta Gerwig’s adaptation of her beloved classic. It’s a novel that has been passed down from one generation to the next and is just as progressive now as it was in 1868 and 1869 when it was originally published in two volumes. Alcott’s father, Bronson, nourished his daughters’ minds and fostered a love of reading, creativity and independence.

In the same way, Alcott created a world where the March sisters, Meg, Jo, Beth and Amy, all made do with what New England had to offer during the Civil War when their father was away, and where Marmee fed her daughters’ aspirations by giving them the strong foundation they needed to succeed in what was predominantly a man’s world. Gerwig’s adaptation staunchly pays homage to the story, the characters and the foods they prepared. She does so with the expert assistance of many talented women, including Food Stylist Christine Tobin and Set Decorator Claire Kaufman.

Tobin, whose career as a food stylist was launched while working with Executive Chef Ana Sortun at Oleana in Cambridge and is now the key food stylist at Christopher Kimball’s Milk Street, earned her BFA from the School of the Museum of Fine Arts and has been wowing food enthusiasts for decades. Remember the steamy pie scene in the movie “Labor Day”? That was Tobin’s handiwork, and her first film. “Working as a food stylist for film is very much like working at a restaurant. It’s fast-paced, there is constant pressure and you always need to expect the unexpected,” says Tobin. In the past she had worked alone, but for “Little Women,” she had the opportunity to hire two amazing women food makers to assist her. Her semi-industrial kitchen at home, with an attached sunroom to store extra equipment such as a freezer, refrigerator and Cambros (insulated food transport boxes), is invaluable to her work. “The foods I prepare for various films are always real, always edible for our actors. This helps define a moment, a character and a scene,” says Tobin.

In keeping with Alcott’s vision, and to ensure verisimilitude occurs even in the smallest food scenes, the first thing Tobin did, after speaking with Prop Master David Gulick, was visit Louisa May Alcott’s Orchard House. What she thought was going to be a brief, impromptu tour turned into a four-hour, intense study of the Alcotts’ life. “I could not have been more lucky than arriving and accidentally meeting Orchard House’s Executive Director Jan Turnquist,” says Tobin. Here she learned about the culinary history of New England, which catapulted her into research that was needed to ensure the piece’s historical accuracy while bringing the Alcotts’ timeless treats and dishes to center stage. Tobin spent innumerable hours researching online, collecting vintage cookbooks and comparing old and modern recipes. Having background knowledge of how the Alcott family lived helped define the foods seen on the March family’s plates. “All foods were obsessively designed with the delicate balance of the reality of Louisa May Alcott’s life and her fantasy life of ‘Little Women.’ There are touches throughout all food scenes that were based on my discussion with Turnquist. For example, the Alcotts loved granulated sugar, so you will see sparkles of sugar throughout the film on cake tops and cookies as an homage to Louisa May Alcott,” says Tobin. 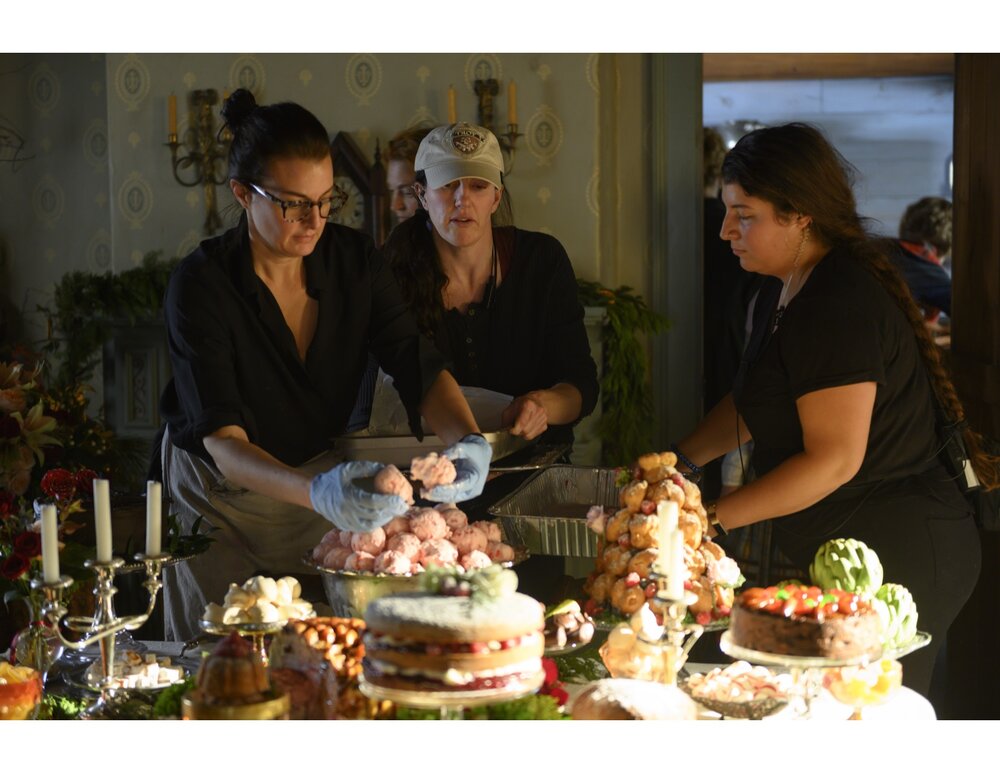 Tobin designed the food for this film to showcase the artistry, sentimentality and unconditional love the March sisters shared. “For my purposes, this was as much truth as the history of food during this time. Although the March family didn’t have money for fancy foods or dressings, I imagined them using autumn leaves, dried flowers, old ribbons and string to decorate their cakes and trays. The wealthy Laurence family had the means to own a hot house, growing beautiful flowers. These flowers are what adorned all the treats of their gift of a Christmas feast. All the magic of what that might have looked like is present in this scene. Like looking into a dollhouse. This is how I imagined Louisa May Alcott scripting her scenes,” says Tobin. 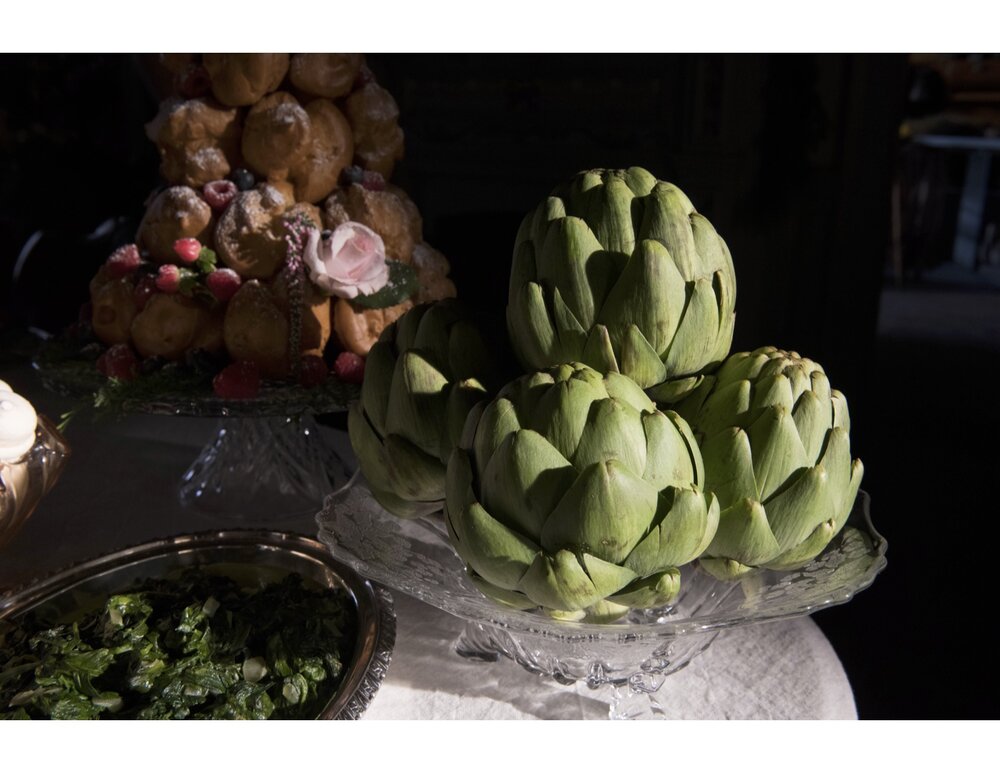 Tobin gleaned tasty tidbits of information when visiting Orchard House, which is also the setting for “Little Women.” The Alcotts raised chickens, tended vegetable gardens and cared for apple and pear trees growing in the orchard. Mr. Alcott built boxes and crates to layer their apples and pears in sand which helped preserve them when they were stored in the basement through their long winters. Foods were prepared simply using salt, but not spices.

Socio-economic status influenced how foods were prepared, too. The Marches would have cooked with dark flour, whereas the Laurences would have used white flour. “The Alcotts often ate bread, apples and water at mealtimes—and gruel for breakfast (sprinkled with sugar, of course!). They cooked with butter instead of meat fats. They were a vegetable-heavy family who never wasted their gardens’ bounty, so pickling, stewing and preserving was a big part of their regimen. Although meat was not a big part of their diet, cured or preserved meats were often used to flavor soups or stews. Iceboxes were used during this time, with ice brought in from Walden Pond. All the foods of ‘Little Women’ reflect what I learned about the Alcott family from my meeting with Turnquist,” says Tobin.

Set Decorator Claire Kaufman is a member of the Set Decorators Society of America (SDSA), and received an Emmy nomination for FX Networks’ “American Horror Story: Cult.” Her keen attention to detail adds to the authenticity of “Little Women,” and helps bring Tobin’s visions to life. She worked tirelessly to give each set a very specific color palette and feel. “In the March house, I used a lot of Blue Willow china, etched glassware and a bone flatware, as well as authentic bread plates and bowls,” says Kaufman. Most pieces were bought at a couple of small stores in Concord. She bought a ton of silver at the Brimfield Antique Show and at surrounding antique stores, all of which are proudly displayed in the Laurence household.

But she couldn’t have done it alone. “I cannot begin to explain how much scouring my two buyers, Katy Shiry and Melissa Cooperman, and I did for the film. As well as my Assistant Buyer, Olivia Dibs, who scoured the internet for items. We were able to purchase the entire movie basically in New England, which I love, because it made it so authentic,” says Kaufman.

There are a total of twenty seven food scenes in Gerwig’s rendition of “Little Women,” but one in particular stole Tobin’s heart: Marmee’s birthday celebration. “The cake was scripted to be a playful cake that Jo made with her students to be presented to Marmee for her birthday. Block-like, piles of frosting, as a child would do,” says Tobin. The cake Tobin designed was a simple chiffon with a buttercream frosting. “What makes this cake so special to me is that my (now nine-year-old) daughter picked the brightly colored leaves while we walked around Jamaica Pond and Forest Hills Cemetery. She helped me pick leaves, twigs and acorns as we strolled and chatted. These beautiful New England leaves are what adorn this simple cake,” says Tobin.

She was so thrilled to see how the characters presented this very cake to Marmee. “Like all the foods of ‘Little Women,’ food is love and the greatest gift to give is something that is made from one’s hands and heart. For me, the cake symbolizes a torch being held by all women. We are strong, we are fierce, we are ambitious, we are soft, we love. I am most pleased that I was able to include my own ‘little woman’ to this most special scene,” says Tobin.

WATCH NOW: Made in Mass. THE NEW MUTANTS OFFICIAL Trailer