Brigham Road in Waltham the scene of Cameron Diaz movie 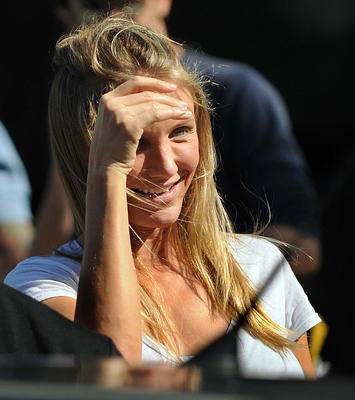 Staff photo by Ken McGagh
Cameron Diaz was in Waltham filming “The Untitled Wichita Project” today. The crew was at 11 Brigham Road. The film also stars Tom Cruise, who was not in the city.

WALTHAM — In the blink of an eye, a streak of blonde hair splashed up in the wind as Cameron Diaz was whisked into an unassuming silver Toyota Prius on Brigham Road.

A small crowd lined up on the sidewalk to catch a glimpse of Diaz or Tom Cruise filming a segment of “Untitled Wichita Project’’ on Wednesday suddenly erupted in brief applause at her fleeting appearance.

An officer on detail yelled to a fellow officer, “You missed her!’’

As they watched the Prius slink away, two disappointed women at the scene complained, “She should have stopped to wave.’’ But for the most part, the brush with Diaz and the film crew was good enough.

“I’m so excited. I can’t fall asleep. It’s weird,’’ said 13-year-old Grace Herron, an eighth-grader at McDevitt Middle School. The Herrons see themselves as the lucky family whose home 20th Century Fox chose to use in the film starring Cruise and Diaz.

“All my friends are jealous – but not in a (catty) way,’’ said Grace Herron, who couldn’t stop smiling.  Her parents, Tod and Rose Herron, also said they were thrilled about the whole production at their house at 11 Brigham Road, a simple, pale yellow colonial.

“I loved him from his movies,’’ said Rose Herron.  Tod Herron said, “My favorite is an old one – ‘Risky Business.’’’

The Herrons said they were not allowed by contract to discuss why their home was selected or other details, but said everyone involved in the film was “great’’ to them.  Police and neighbors said there were no prima donnas among the actors or film crews – the locals said the movie professionals have been respectful, considerate and generous since they arrived yesterday morning around 8. And no limo for Diaz – who insisted on riding in a Toyota Prius.

“She’s eco-friendly, so they had to have hybrid cars for her,’’ said Officer Joseph Guigno.  Guigno, who is also a neighbor, said the production is good for the neighborhood, the city, and the economy in general.

Crew members, who all hit up D’Angelo’s for lunch yesterday, have been using a lot of the local facilities and restaurants, he noted. As a neighbor, Guigno said, “It’s nice when I’m out walking my dog, to see something going on that’s kind of exciting.’’

Tom Keene, who lives across the street at 110 Main St., opined that the production would likely be good for future home sales as well. The movie producers approached his wife, Marianne Keene, who runs “Keene Cuts’’ out of her home, to ask permission to for a shot panning over their house, he said. She immediately said yes, and then let him know about it, he said, laughing.

Neighbors at 31 Brigham Road, William and Margaret “Peggy’’ Lee, were also delighted to get a little piece of the action.

“They borrowed my chair! If they don’t cut the scene, my chair will be in the movie – my chair will be famous,’’ said Peggy Lee, laughing. Peggy Lee was out on the sidewalk early enough to catch Diaz when she emerged from the house and “gave a little smile and wave.’’

“She was very beautiful, very natural-looking. And very tall,’’ said Peggy Lee.  The whole production has been fun, and the crews, wonderful, she said. William Lee, peering across the road at the crews hustling around his neighbors’ lawn, called the local filming “once in a lifetime.’’

Neighbor Christina Pulselli said she was hoping to get a glimpse of Cameron Diaz. Watertown resident Janet Powers took a little half-hour break from her routine to watch the production.

“Who am I waiting to see? Anybody!,’’ she said, laughing.