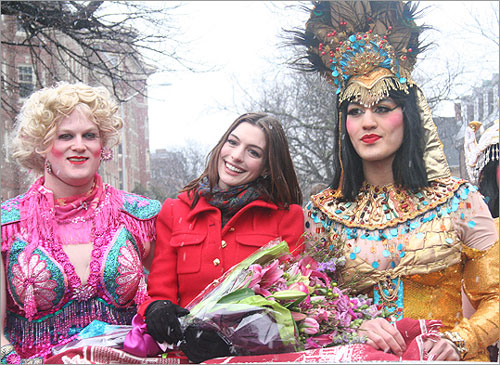 Hasty Pudding members escorted Anne Hathaway to a roast in her honor as Woman of the Year. (Photos By John Tlumacki/Globe Staff)

A snowy motorcade through Harvard Square. A bawdy drag queen show. A brass pot to put on the mantel. It all added up to one memorable afternoon for actress Anne Hathaway as she received the Hasty Pudding Theatricals’ 60th Woman of the Year. In time-honored Pudding tradition, Hathaway, 27, was brought onstage at Harvard’s New College theater for a 30-minute roast hosted by Pudding pooh-bahs Clifford Murray and Derek Mueller.

Playing merrily along, Hathaway was lauded and teased by an all-male cast portraying Julie Andrews, Liza Minnelli, Meryl Streep (decked out in silvery “Prada’’ couture), and Puff Daddy the Magic Dragon, whom Hathaway pretended to slay. In homage to her roles in such films as “The Princess Diaries’’ and “Brokeback Mountain,’’ there were plenty of groan-worthy jokes about gay cowboys, Hathaway appearing topless onscreen, and her being “the second most famous Anne to keep a diary.’’

But Hathaway gave as good as she got, showing off her skills at arm-wrestling, sword-wielding, singing, and even defending some of her weaker screen credits (“Excuse me,’’ she barked at one point, “I won a Teen Choice Award!’’). Hathaway capped the roast with an acceptance speech composed in rhymed couplets (sample: “I feel warm and gooey inside / My rump is swollen with pride’’). Her main theme? She expects some serious help when her kids grow up and apply to Harvard.

Hathaway sat through a preview of the forthcoming Pudding Theatricals show “Commie Dearest,’’ a ribald satire on the 1950s, and held a brief press conference afterward, saying she felt “lovingly skewered’’ by the whole experience. She also said a network of Harvard-alum friends, one being director Edward Zwick, had helped prepare her to become what she smilingly called “roast pudding.’’ Confessed Hathaway, “I’d always hoped to be a Woman of the Year someday,’’ an honor for which she felt “surprisingly touched.’’

That pudding pot? She just might fill it with potpourri, Hathaway said, or maybe fortune cookies. As for last night, she said, she’d be drinking out of her new trophy – “whatever they’re pouring.’’

Director John Wells screened his new film, “The Company Men,’’ at the Coolidge Corner Theatre last night. The downsizing drama starring Ben Affleck, Tommy Lee Jones, and Kevin Costner was shot in Boston last year. Some of the cast and crew saw it the night before at Kendall Square Cinema, after which Wells and a few others, including actor Tom Kemp, headed to Tommy Doyle’s in Harvard Square. . . .