By ABIGAIL B. LIND and REBECCA A. SCHUETZ
HARVARD CRIMSON
February 23, 2010 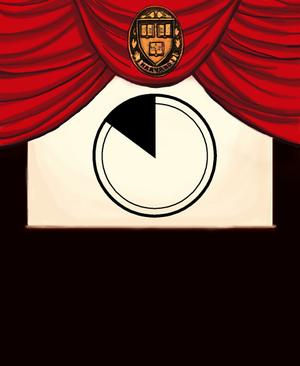 WHITNEY E. ADAIR
Drawing financial support from the university and inspiration from the colorful Boston film community, film students find ample opportunites to pursue creative projects from within the department of Visual and Environmental Studies.

In the summer of 2009, film student Alexandra E. Zimbler ’10 visited her grandmother in Saint-Malo, Brittany, to interview her for her documentary thesis film in Visual and Environmental Studies (VES). She had planned to make a film about her grandmother’s life in a nursing home, but found her main character in the early stages of Alzheimer’s disease. “She didn’t have her memory any more,” Zimbler said. “I went to her old apartment, looking for photographs, anything that would give me clues about her life and her past. I found some original letters that she had written to my grandfather in 1951 and 1952. That was the key.”

These discoveries inspired Zimbler to intercut her documentary project with fiction segments based on her grandmother’s correspondence. Six months later, after arranging to take her fall exams in absentia, Zimbler flew to Paris with the director of photography for her project, Alexander E. Berman ‘10. The two held auditions for the fiction scenes six hours after arriving in Paris, and began shooting the next day.

From within the Film track in VES, Zimbler benefits from a department steeped in tradition and generous with its grants. While not as career-oriented as other school’s programs, the track offers students both conceptual grounding and creative experience in an economy increasingly hostile to independent filmmakers.

Filmmaking can be one of the more precarious fields for undergraduates to enter immediately after graduating. Would-be documentarians face difficulty getting funding outside Harvard, and those looking for work on fiction films encounter their own set of obstacles. “You can’t get a job on a set unless you’ve had job on a set,” remarked Robb Moss, a lecturer on nonfiction filmmaking in the VES department and the director of documentaries “Secrecy” and “The Same River Twice.”

To avoid financial pitfalls, Zimbler hopes to apply for fellowships and grants from Harvard that will allow her to pursue a documentary about children and sports after graduation. “I’ve been thinking about going to China, to [the] Ukraine, to different places in Russia. I seem,” she said with a smile, “to have this fever about filming abroad.” Between the obvious costs of travel and permits, and Zimbler’s affinity for more expensive recording material—her thesis, “Dear George” was shot on high-definition digital video and Super 16—she’ll need those grants.

To complicate matters, the VES film program is not structured to channel students directly into the industry. Because the Film/Video field teaches film as a concentration within the liberal arts, the methodology of the Harvard film program often varies wildly from how film is taught in undergraduate film schools such as the ones at New York University, the University of Southern California and the University of Califonia in Los Angeles.

“In film schools, there is a notion that they’re trying to get you jobs, and that this is an experience that leads you into the industry,” Moss said. “Courses are broken down into the industrial mode: there are courses on cinematography, or scriptwriting, or producing, or directing. We don’t do that. We are interested in film as a way to know the world, as any other discipline here would.”

Berman would agree. “You don’t necessarily get the screenwriting and dramaturgical education that you would in a film school,” he said. But Harvard’s methodology has its own advantages. “You don’t get dogma or pressure to conform to a certain dramatic structure,” he added. This creative license is one of the chief benefits of learning filmmaking at Harvard.

In addition to the strong conceptual education that students receive, Harvard’s filmmaking program is exceptional in its age and establishment. The Film track of VES was founded early, in 1969. Despite its small size, it boasts several notable graduates, including Mira Nair ’79 (“The Namesake”) and Darren S. Aronofsky ’91 (“The Wrestler”).

This established foundation has also supported the birth of new film programs at Harvard University. In 2005 the VES department diversified their programs with a new Film Studies track, which focuses on analysis and theory rather than production, and created a PhD program in Film and Visual Studies this past fall. This chain of development is a rather unusual one. At other universities, film studies departments long predated filmmaking courses.

The university’s location is another draw for filmmakers. Harvard is a well-situated center for nonfiction film production, as is the Boston area in general. Oliver A. Horowitz ’08, a VES teaching fellow, pointed out this advantage. “Not to say that Boston is the epicenter, but Boston is a huge, huge bastion of nonfiction film,” he said.

Many of the big names in documentary—including Moss, Ross McElwee, and Aflred Guzzetti—teach in the Harvard VES program. Beyond Harvard’s campus, Boston is also home to celebrated documentary filmmakers like Frederick Wiseman (“Domestic Violence”)—“kind of the godfather of cinéma vérité,” in the words of Horovitz—and Errol Morris (“The Fog of War”), compared by critic Roger Ebert to Alfred Hitchcock and Federico Fellini. The high concentration of filmmakers in the area is due in part to the number of colleges and universities, many with strong film programs, located in the Boston area.

This film presence can offer a myriad of options to VES graduates like Horovitz who decide to remain in the area. Upon graduating, Horovitz became the first Teaching Fellow of VES 50: Fundamentals of Filmmaking. But due to the Massachusetts Film Tax Credit luring major studios to shoot in Boston, he also has had the opportunity to work on commercial film. “It’s great,” said Horowitz. “I’ve TA-ed here, and on Fridays I’ll PA [work as a Production Assistant] on a hundred-million-dollar movie.”

Damien S. Chazelle ’08, a VES graduate, took advantage of what Boston had to offer in a different way. He worked the energy of the Boston jazz scene and cityscape into a full-length feature film. His film, “Guy and Madeline on a Park Bench,” began as his senior thesis and showed at New York City’s celebrated Tribeca Film Festival in 2009.

Chazelle could not have realized his project without continuing support from the Harvard community. A fellow VES concentrator, Jasmine A. McGlade ’07 produced “Guy and Madeline,” while his former roommate Justin G. Hurwitz ‘08 composed the score. Even now in Los Angeles, Chazelle is living with other students from Harvard. “There’s still a kind of community that continues after gradu “Because at the end of the day, that’s what it’s all about: finding collaborators whom you trust and who are going to make you a better filmmaker.”

SCREENED FROM THE OUTSIDE

While nurturing students’ personal development, the Harvard community can also isolate them from the outside world. The “Harvard Bubble” is a commonly acknowledged problem amongst students. Although Boston is a center for nonfiction film, many students feel they have not experienced it as such. “Boston’s a really cool film community, and I wish students took more advantage of it,” said John P. Harrison III ’09. “It’s kind of hard to escape the Harvard campus.” Eliora M. Noetzel ’10 has had exactly that difficulty. “I’ve not been to many film festivals, because getting off campus is not something I do often,” she said. “We’re lucky to have the HFA [Harvard Film Archive] here, and we have a lot of people that come here specifically to present work, so we don’t really have to leave.”

In some ways, this shelter effect can be beneficial; as students, Harvard filmmakers do not have to face the harsh realities of the suffering film industry. As a newcomer, McGlade has already encountered difficulties in finding a distributor for “Guy and Madeline.” “This year, last year, financially everyone’s taken a hit, and distributors aren’t taking the same risks that they used to,” said McGlade. “It’s been a really tough year for independent film.”

In response to the economic downturn, the number of films produced a year has been dropping. In 2008, 520 films were produced by the major studios. The projection for 2010 is between 300 and 400. From the point of view of a distributor, the bar has been raised. “You’re making fewer films, and being more careful about the ones you’re choosing, so it’s harder to get funding,” McGlade said. “People aren’t getting the same amount of money for deals.”

Robin Dawson, who was Massachusetts State Film Commissioner for 10 years and is now the Executive Director of the Boston Film Festival, has a more optimistic view for the future of independent film. “I think the independent industry will start to maybe benefit from the studios putting out less films a year,” she said. “I anticipate that more indies will be picked up and distributed by the studios.”

Boston itself, however, has been somewhat sheltered from this effect due to the Film Tax Credit, which was instated in 2006. Since its implementation, there has been a steady increase in the number of films produced in Boston. “Boston, as a result of a tax break for films, is kind of crazy. It’s become this huge haven for feature films,” said Horovitz. Martin Scorsese’s “The Departed” and “Shutter Island” are two such films shot in Boston since the tax credit.

From Horovitz’s perspective as a Production Assistant working on high-budget fiction filming in the area, shooting has noticeably taken off in the last year or two—but not only due to tax credits. “People are realizing it’s much easier to shoot in Boston than in New York,” he said. “In New York, there’s so many permits you have to get, and it’s so bureaucratic.”

Moreover, productions are ironically smoother in Boston because Bostonians are so unused to them. “In places like the Village, people are so overloaded by film shooting there, they just hate it,” Horovitz said. “Boston [is the] opposite. People are so excited to have films here, they just love it. Last year, people were like, ‘Oh, my God, Mel Gibson’s coming here, that’s awesome!’ The people are great.” It seems that film in Boston—and at Harvard—will continue to thrive.

Made in Mass. “Sound of Metal” Earns Six Oscar Nominations

This year’s Academy Award Nominations Announcement took place on Monday, March 15, 2021. The 93rd Oscars will air live on ABC on Sunday, April 25, 2021. For a complete list …

Can You Spot Medfield in “I Care A Lot?”