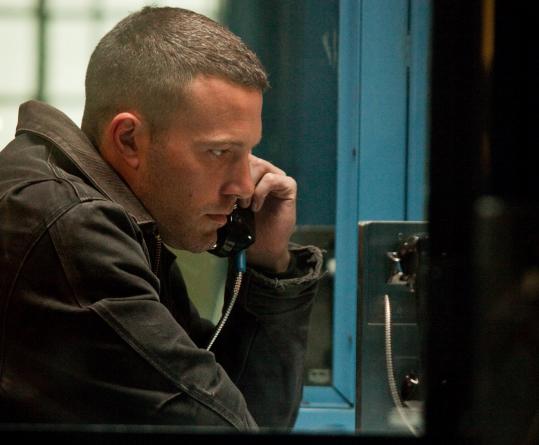 I don’t care what anyone outside the greater metropolitan area says: “The Town’’ takes place in Movie Boston rather than the real thing. Movie Boston is a sub-Scorsese landscape of stubbled men walking down mean Suffolk County streets that exist primarily in the minds of good pulp novelists and bad screenwriters, and its authenticity depends far too much on Hollywood actors trying hahd to bend their dialogue around non-rhotic speech patterns.

That said, Ben Affleck’s latest is a pretty decent crime drama — not a patch on the best parts of his directorial debut, 2007’s “Gone Baby Gone,’’ but it’s moody and grim and engrossing if you approach it with the right expectations. The local horselaughs that have greeted the trailer for “The Town’’ — with its stentorian voice-over implying that the “one-square-mile neighborhood called Charlestown’’ is responsible for every urban plague from bank heists to bedbugs — won’t extend to the movie, which traffics in clichés but keeps the traffic moving.

Instead of directing his brother, Casey (who’s off chasing the ghost of Joaquin Phoenix), Affleck directs himself this time. He plays Doug MacRay, the leader of a four-man Charlestown bank-robbery crew that prides itself on planning, efficiency, and the threat of maximum violence. We see them in action early on and we also see the team’s weak link: Jeremy Renner (“The Hurt Locker’’) as hair-trigger Jimmy Coughlin, Doug’s oldest friend and biggest liability.

If Affleck’s doing a riff on the sexy, doom-laden antiheroes of ’40s film noir, Renner’s doing straight-up Cagney, and he’s the most watchable thing in the movie. His character is itchy with aggression, complete in his loathing of yuppies and other “tunies’’ crowding into the old nabe. If Jimmy knew that Doug was falling for the lissome bank manager they briefly took hostage on their last job, he’d pitch a fit.

Yes, it’s that kind of movie, where you have to swallow some sizable coincidences and implausibilities if you want to play along. Claire (Rebecca Hall) may not have laid eyes on Doug during the robbery (he was wearing a Halloween mask) but she certainly heard his voice, and Affleck gives that voice a velvety growl a woman would remember, even if she didn’t turn out to live just on the other side of the Monument.

The romance is the silliest part of “The Town,’’ but it’s also the part that works best, maybe because it’s so frankly a movie device and this director so frankly loves movies. As an actor, Affleck is a nice visual match for Hall — they’re both big, rangy people who seem comfortable in their own skin — and we root for Doug and Claire to make it even as we know that the big revelation (I’ve been dating the guy who held me at gunpoint and ditched me in East Boston!) might possibly be a deal killer. That knowledge weighs Doug down and gives him substance: He’s betting it all on something that can’t last.

Otherwise, “The Town’’ feels a little too familiar and a little too canned, from the regulation three-day beard on everyone up to and including Jon Hamm’s implacable FBI agent (really? Feds don’t shave?) to Blake Lively (“Gossip Girl’’) slumming it as Jimmy’s slatternly sister Krista, a single mom who pines for Doug but is willing to go home with whoever’s paying at closing time. This is more or less the same role that got Amy Ryan an Oscar nomination in “Gone Baby Gone,’’ but Lively is, to put it kindly, not Amy Ryan.

Is “The Town’’ authentic? Hell if I know — I’m from Brookline. For that matter, the director’s from Cambridge, and the curse of this city’s clannishness (one of them, anyway) is that you can never speak to the reality of the next town over without somebody getting their panties in a twist. That’s partly the point of both Chuck Hogan’s original novel (“Prince of Thieves’’) and this adaptation: A community that takes so much pride in insularity will eventually choke on it. But Affleck’s more interested in townie mythologizing and borrowed Lehane-ian street cred; did I mention he’s from Cambridge?

On the local-color level, at least, he gets things reasonably right. You buy that a vicious neighborhood top dog might look like Pete Postlethwaite and work as a florist; that his muscle might look like Dennis McLaughlin, a non-actor with excellent B-movie presence.

As the other members of the crew, Slaine and Owen Burke have the proper pasty anonymity, and the faces in the corners of the screen are pink and hard. The knowingly chosen locations lead up to an amusing performance by Fenway Park as itself, and the grand absurdity of a high-speed police chase through the narrow streets of the North End has been thought out with devilish care. For once the geography in a Boston movie makes sense; even the standard shot of the Zakim Bridge has relevance.

The accents? Oddly, Affleck’s feels the most forced — maybe Hollywood diction lessons beat the regionalism out of him. Hall conquers her British cadences and sounds appropriately mid-Atlantic, and Renner, bless him, wins the Jill Quigg award for most lived-in local speech patterns. He doesn’t push it and he doesn’t underdo it; this is just how Jimmy talks, which is an extension of the shark-like rapacity with which he moves through the world. Accent is destiny in the Movie Boston rule book, and the pleasure and the limitation of “The Town’’ is that it plays squarely by the rules.

Ty Burr can be reached at tburr@globe.com.

Rockport back on the big screen