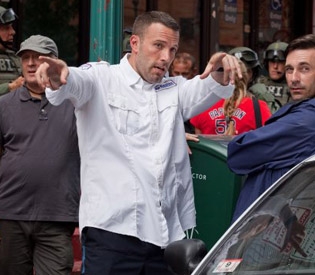 Ben Affleck has one thing to say to the North End: “I’m sorry.”

The actor/director and Hub native came back to Boston to film “The Town,” a crime drama based on Chuck Hogan’s book “Prince of Thieves,” set in Charlestown.

“This movie is nothing if not a long apology to the people of the North End,” Affleck said Friday in Toronto, where “Town” got a gala screening at the international film festival.

“We had a lot of trouble filming in the North End because it’s quite constricted,” he said of scenes in which cops pursue thieves in a high-speed chase through the narrow streets.

As sensationally paced as it is on film, Affleck revealed it was hellish to shoot.

“The community is extremely powerful politically in the North End, whereas if you’re (filming) in Dorchester you wouldn’t be getting the same kind of push-back from the municipal authorities. So it was very difficult for us,” he said.

“We needed to be very judicious about how we worked in the North End. When you’re blocking up traffic, where we parked, how much we smashed, how much we burned the cars – it just got very, very hard to do. Then to make matters worse – it rained. So we kept postponing and postponing. We’d close all the streets and then we wouldn’t be shooting.

“Now the North End is a great tourist destination and they’re making a lot of money, so we’re taking money out of people’s wallets. Anyway, I’m sorry. I hope that they like it.”

With two Boston-set dramas, “Gone Baby Gone” and “The Town,” “I’m not looking to specifically have a career making stories about Boston. I just happened to find two stories set in Boston. Probably being from there helped me a little bit.”

“The accents. If you don’t do them well they can really upend your movie.”

“Because it’s not just an accent, it’s not just vowels and diphthongs, it’s a world that you carry. It’s vocabulary. It’s so many different things,” Affleck said.

“Particularly people in Boston are really hard on that kind of thing.”

That, and closing the streets in the North End.