It’s usually cringe-worthy when non-native actors attempt to mimic Bostonians: Julianne Moore on “30 Rock” and just about any movie about the Kennedys come to mind.

But pity the locals who routinely get typecast as a Southie waitress or Charlestown thug because their thick accents make it “wicked hahd” to land other roles.

Boston Casting, which works in films, commercials and reality TV, is offering a solution: a four-week “Boston accent reduction” class. Owner Angela Peri had been mulling the class for years, because her own accent prevented her from getting work as an actress.

“If you’re an actor and really want to pursue a career and play with the big boys, you can’t have an accent,” Peri said. “Over and over again I see somebody with great talent, and they can’t get past the accent.”

Peri estimates that just one in 10 jobs that she casts calls for a Boston accent.
“We’re doing this TV show with Dana Delany called ‘Body of Proof,’ but it’s set in Philadelphia,” she said. “As soon as they hear the Boston accent – no matter how good the actor is – it’s ‘Out!’ I’ll even practice with them before they go on camera: It’s ‘mother,’ not ‘mutha.’ It’s ‘brother,’ not ‘brutha.’ ”

Speech pathologist Marjorie Feinstein-Whittaker, a corporate communication trainer who’s been doing “accent modification” work for the last decade, is one of the course teachers.

Instruction will focus on correcting the hallmarks of a Boston accent, from omitting “r” at the ends of words – “Pahk the cah in Hahvahd Yahd” – to correctly pronouncing “or” words such as corn and color instead of “cawn” and “coluh.”

The key is motivation and practice, according to Feinstein-Whittaker. Participants will get word lists targeting problem sounds and stories loaded with r-colored vowels to practice at home.

“Initially they might feel like they sound a little bit worse or stilted,” Feinstein-Whittaker said. “But I think it’s easier for an actor, as opposed to someone like a lawyer, because they do a lot of role-playing and reading scripts. It’s more in their comfort zone.”

Once mastered, a neutral accent can easily be turned on and off, she said.

“I had one client saying he was here for ‘accent elimination,’ ” she said. “I said that sounds like an extermination service. I’m not taking away who you are. I’m just adding a neutral American accent so you can use that when the situation dictates.” 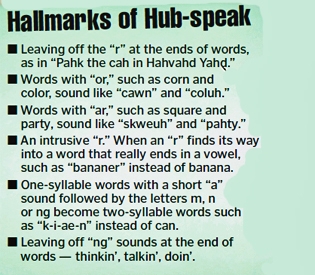 TrailerAddict: ZOOKEEPER opens in summer of 2011