As more big movies come to Boston, an indie-film industry grows around them

B Line to Hollywood?

It’s May, and about a mile north of the Boston College stop on the B line, in a three-decker on Turner Street in Brighton, a scene from director Jared Vincenti’s film Day of Youth is about to be shot. The film is a mumblecore, high-concept romantic comedy in which Rhee, a twentysomething college-grad barista, falls into a coma after a bike accident and wakes up three years later to find that absolutely nothing in her life has changed: it remains directionless, unfulfilling, afflicted by the same messy relationships.

It’s hard to tell that there’s a movie production in progress. The scene, a party in the backyard, looks like any party in any backyard, except for the lights, reflectors, audio-recording equipment, and camera. The production office is the living room on the third floor — where Vincenti, 30, waits for dusk to start shooting. The setup doesn’t look like much compared to the studio-film rows of equipment trucks and trailers that have become a common sight in the city.

For those street-blocking, celebrity-studded productions, you can thank the Massachusetts Film Office. Since 2005, it has offered a tax incentive for movies with budgets of more than $50,000. That deal has attracted such big projects as Ben Affleck’s The Town and Seth MacFarlane’s Ted. 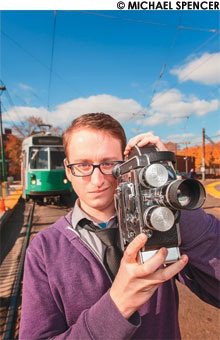 And they’ve made use of Boston locations, talent, and resources, stimulating the economy and providing employment in the film business. According to MFO director Lisa Strout, the program attracted six Hollywood productions in 2012 and five in 2011, compared to one in 2004, a year before it came into effect. These projects generated $222 million in local direct spending in 2011 alone. Because of the success of the program, she adds, more than 500 local companies have benefitted by serving film productions in some capacity, and more than 40 companies have been established that work for the film industry exclusively.

But what about the little guys, the scrappy independents who want to make their breakout movie on a shoestring? In January, MovieMaker magazine listed Boston as the sixth-best city in the country for independent filmmakers. It based its assessment largely on the appeal of the tax incentives. But what does the film office do for the smaller films, the vast majority of local projects, whose budgets are not big enough to qualify?

For a movie like Day of Youth, which costs a lot less than $50,000 to make, there’s no tax deal. But Vincenti sees important indirect benefits.

That’s where the benefits of the Film Office kick in, indirectly.

“The studio movies attract talent, and you get a lot of people who are here who have the skills and are hungry for more,” he says. “So you have a lot of talent here, but they’re not getting above the line in the big pictures. That’s why everyone here isn’t doing it to make money, but to get it out there, to get recognition, to get it seen — so that we can take that step up to the next tier.”

This creates communal spirit among Boston indie filmmakers. They collaborate on ideas and work for free on each other’s projects. That’s especially true with Day of Youth. It’s an in-house production — literally. Almost everyone in the film lives in the house where it’s being shot. 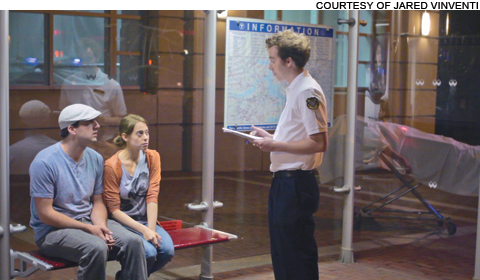 TURNER STREET PRODUCTIONS
“We joke that this is ‘Turner Street Productions,’ ” says Vincenti. “My roommate Mel is the gaffer. And Fred” — he nods at Fred Young, the cinematographer, who just joined us to pass the downtime — “lives on the first floor. That’s just two. So one night we were all sitting in the backyard having a beer, when I was like, ‘I think we’re making a movie.’ ”

“And then it turns into that stereotypical scene,” adds Young. “Some guy goes, ‘I’ll shoot your movie! I’ll design your movie! I’ll act in your movie!’ When you want to, you can have big gatherings here sort of spontaneously. And then you start pulling all these strings to create a project like this.”

Young, who is 35, seems like the backbone of the bunch. Older, wiser, committed, he’s traveled a long path to get to this point. 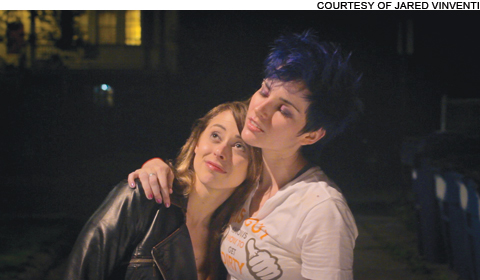 “I went to school at BU as a theater technical director,” he says. “For 15, 20 years I worked all around — Connecticut, Utah, everywhere. I tired of theater, decided to switch to movies, came back up here, and I basically said, ‘I’ll work for free. Just show me how to do this business.’ I knew almost nothing about film at that point.”

Young quickly picked up the skills of a lighting director, did some movies, and joined the union. He’s up on Boston. “There are all these people who had small careers here and then had to go away because there’s no work. And now, [with] the amount of work that’s coming back into town — the tax incentive and all that stuff — they can come back because there’s somewhat of an ability to have a career here.”

The star of Vincenti’s film, Ally Tully, 26 (who doesn’t live in the house), reversed the usual path for actors seeking film roles: she moved from New York to Boston. Although now she’s reconsidering.

So far, her success with studio movies shooting here has been mixed. Recently, she played one of the two young women accosted in the Boston Common by the title animated stuffed bear in Ted. “He grabbed my boob,” she says.

“I enjoy making films on the indie side,” Tully says. “But they have zero money. I’m going back to New York after filming here.”

The sun has set. It’s time to shoot. The crew and cast rehearse one more time in the backyard. Party lights droop around the perimeter; in the background a half dozen extras mime a bibulous game of beer pong. Tully’s character, Rhee, cradles a beer and talks with a couple of friends.

“I’m so tired of this. . . ,” Tully says, as Rhee, with a wave of her beer that encompasses everything.

TRICKLE-DOWN THEORY?
Struggling actors and filmmakers seem to like Boston, especially now, with the resources stirred up by the big movies. But aren’t most, like Tully, really just trying to build up a résumé to be seen by the big leaguers? As Vincenti says, “I’m hoping to go to studio people and say, ‘Well, this is what I can do just with my friends; let’s see what I can do with a little more heft’ ” These days it seems like that heft can only be obtained in New York or LA.

Or maybe Austin, second in the MovieMaker standings — and home base of Richard Linklater, whose first film, Slacker (1991), established an eccentric style of filmmaking, and of life. That’s where 34-year-old Andrew Bujalski — whose first feature, Funny Ha Ha, got independent filmmaking going in Boston back in 2002 — now resides. As it turns out, though, Bujalski didn’t move to Austin in search of greener pastures, at least notcinematic ones. “My departure had nothing to do with career,” he says. “I was chasing after a girlfriend.”

When he was in Boston, the film scene was hardly bustling — “except for documentaries,” he says. For Funny he had to scrape together on his own most of what he needed, although a grant from the Mass Cultural Council helped. “I have real gratitude for that,” he says. “And I have a coffee mug with their logo on it that’s in heavy rotation here.”

As for the film office, it wasn’t really a factor. “I don’t know what the policies of that office were at the time,” he says. “I don’t think it even occurred to me to approach them for help. We were working entirely with the resources at our fingertips.”

He’s very keen on Austin — the support system, and the parking especially — but would Bujalski consider a return to his hometown now that so much is going on?

“Oh, sure,” he says. “I think all that an indie production can ask for from any large-scale organization is to be treated with the same attention and respect that are given to the studio productions — whose dollars presumably are the real reason these state film offices exist.”

Bujalski’s many local fans would be happy if he returned to Boston. But another local film luminary, Adam Roffman, 40, is still here and has no plans to leave. Roffman says he benefits from the MFO’s efforts on two levels. First, he works year-round as a set dresser on just about every Hollywood production that comes to town. Second, as a producer of super-low-budget independent films, he, like Vincenti, benefits from the increasing number of film professionals here. Strout at the MFO says that number has quadrupled, reaching 3500, in the last few years.

Hoffman also believes there’s a virtuous cycle here — that Boston’s emerging indie-film scene can also help benefit the Film Office. As program director of the Independent Film Festival of Boston, he brings 80 to 90 filmmakers and their movies to Boston every year. “The festival is always such a great place to come across town and be able to meet all of them,” he says. “They [MFO representatives] could even hold a reception and pitch Boston to them for their next projects.”

The Film Office’s Strout, who left a similar position in New Mexico (Santa Fe ranked third on the MovieMaker list), likes ideas like that. “We encourage, and are willing to participate in, panels, workshops, [and] seminars that take place alongside the screenings themselves that address things like distribution, funding, content protection.”

According to Strout, the film office is helping the little guys, too, when it gives financial incentives to the corporate giants — it’s a kind of trickle-down theory that actually works.

“Indies have a larger pool to swim in, and that’s good for everyone,” she says. “With an increase in activity, more local people are moving up to positions of control. Our community is growing and deepening. Film is not an occasional event anymore.”

YOUTH WILL BE SERVED
Back on Turner Street, things have gone well over the past six months.
Day of Youth wrapped shooting on Memorial Day, a few days after my visit. And Vincenti’s Kickstarter campaign to cover post-production costs reached its goal of $7000.

“We shot about 17 hours of video, so it took a few weeks just to sort through it all,” says Vincenti. “Since then, I’ve been working through the edit, putting together a first cut and then making changes to scenes and structure, and showing the various cuts and works-in-progress to cast and crew for feedback.”

What’s next? “We now have a finished festival cut that we’re sending out, and I’m scheduling color correction and sound mixing for next month,” he says. “The film should be finished and ready to debut in January.”
Vincenti has no plans to leave Boston.

Peter Keough can be reached at PKEOUGH@PHX.COM>

When Hollywood Comes to Somerville, Who Benefits?