Desi Van Til describes her film “Tumbledown” as a love letter to her home state of Maine..

Van Til wrote the indie movie that stars Jason Sudeikis and Rebecca Hall and is based on her life growing up in Farmington. She envisioned filming at some of the small rural town’s landmarks — the old Farmington Diner, the Boiler Room Tavern, her best friend’s lake house, and even Devaney Doak & Garrett Booksellers, where she once worked.

“I was still living in Los Angeles when I began writing early drafts,” she said. The script “came initially out of a place of nostalgia or even homesickness for western Maine.”

At the time, Van Til, now 37, said she was “living in a sprawling city and trying to figure out from afar what it was exactly that made my childhood seem so special to me.”

But Van Til and husband Sean Mewshaw, who directed the movie, had to give up on their dream of filming in Maine.

It was just too expensive, she said, because Maine’s film tax incentive couldn’t offset their roughly $4-million budget much. Shooting in California was too far away from Maine and couldn’t provide a New England feel. New York proved to be slightly over-budget.

So, like a growing number of filmmakers these days, she turned to Massachusetts. The Bay State, which some boosters call “Hollywood East,” has become a fast-growing hub for film and TV production, joining dozens of states that have cut into a business once concentrated in the Golden State.

“Within an hour of downtown Boston, we found the closest match for the Maine architecture, the forest, the classic New England antiquity and charm of the small rural town we were trying to replicate,” Van Til said. “Plus, Massachusetts had the benefit of a robust film incentive program.”

The Massachusetts Film Office touts a program offering filmmakers who spend more than $50,000 in the state a 25% tax credit to offset the costs of paying actors, building sets and other expenses. It’s among the more competitive film incentive programs in the country.

And there has been a stream of notable films that have shot scenes in the state.

Oscar-nominated “American Hustle” filmed all over Massachusetts. “Captain Phillips” filmed in Lincoln and Sudbury. “Ted,” the raunchy bear comedy, filmed in Boston, Canton, Chelsea, Everett, Norwood, Somerville and Swampscott. The sequel also is expected to film in the state. 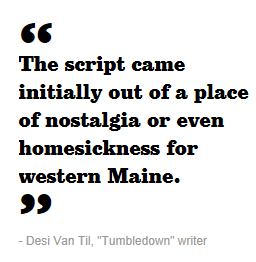 “It was a great place to film,” “Ted” director and writer Seth MacFarlane said of Boston. “You get the tax benefits, but it’s also a really beautiful city.”

In addition to the financial incentive, Massachusetts touts a deepening crew base and a sprawling film studio in Devens that opened in January.

“We now say that Massachusetts offers everything for film, television and digital media — from soup to nuts,” said Lisa Strout, director of the state’s film office.

Massachusetts has a rich history of film production that dates to 1903. But it was “Good Will Hunting,” written by Cambridge natives Ben Affleck and Matt Damon, that put the state on Hollywood’s radar in 1997.

Since then, the filmmaking duo have returned to their home state for several other projects, including the 2010 Boston crime drama “The Town” that premiered at Fenway Park.

Aside from the tax incentives, filmmakers are lured to Massachusetts because of its flexibility as a backdrop.

“Massachusetts has a wide variety of eras and looks because it’s one of the earliest settled states in the country. It has industrial, urban, farms and forest landscapes,” said Mark Kamine, a production manager for “American Hustle,” “Ted” and “The Fighter.”

For instance, David O. Russell’s “American Hustle” was largely set in New York. But the movie used various locations in the Boston area, including the Fairmont Copley Plaza Hotel, to stand in for the Big Apple.

The ability to go into a nearby studio has also been an attraction for filmmakers. New England Studios is located about 40 miles outside of Boston.

“We’re the only game in town,” said Chris Byers, director of operations at New England Studios.

“Tumbledown,” which Byers called the studio’s “guinea pig,” was the first production to use the studios for office space. It also used one soundstage.

“Versatility for filming here in Massachusetts is exceptional,” said Byers, a Lowell, Mass., native who spent almost 30 years in the film business. “I started thinking we really need stages here.”

“Tumbledown” filmed for about a month and wrapped April 25. The movie follows Hannah (played by Hall), who is writing a biography of her late husband — an acclaimed musician — with the help of New York City writer Andrew (played by Sudeikis).

“We have tumbled down,” Sudeikis joked on the last day of filming after being asked to do another take on a key scene with Hall.

Folk music played in the background of the emotional scene as Hall and Sudeikis’ characters looked through relics and reminders of Hannah’s late husband, including old records he left behind.

In addition to the soundstages of New England Studios, the film shot scenes in a privately owned wood cabin in Groton, KJ’s Airport Diner in Shirley and a boutique store in Concord, “Tumbledown” producer Kristin Hahn said. They were locations that emulated Van Til’s memories of Maine.

With “Tumbledown” now wrapped, there’s buzz about what films will shoot in the state next. Byers said eight clients are interested in filming at the studios.

One movie has already generated excitement among Bostonians.

In April, a casting studio put out a call for extras for the James “Whitey” Bulger biopic “Black Mass.” Last week the first images of Johnny Depp, who will play the notorious Boston mobster, surfaced on the Internet. The movie reportedly began filming Monday.