Ghostbusters star Melissa McCarthy wants the world to know that the movie’s “girl power” goes beyond its four leading ladies.

The actress posted a photo on Tuesday of her and co-stars Kristen Wiig, Leslie Jones, and Kate McKinnon posing with the many “remarkable women” who worked on both sides of the camera for Sony’s upcoming reboot of the supernatural action-comedy.

“When we stand together we are unstoppable! #GirlPower,” McCarthy wrote. She also gave a shout-out to fellow girl-power advocate Ellen DeGeneres. 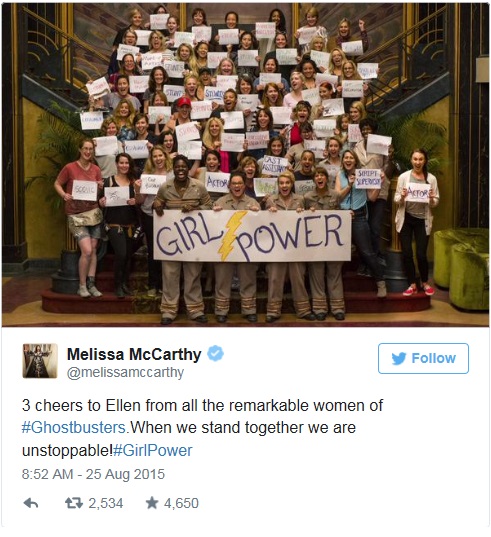 The dozens of women participating in the photo include actress Cecily Strong and writer Katie Dippold, plus numerous stuntwomen, hair and make-up artists, production assistants, prop stylists, and more. (Not pictured, for obvious reasons, is director Paul Feig.)

The revamped Ghostbusters opens in theaters on July 15.

UPDATE: DeGeneres responded to McCarthy’s photo by retweeting it and adding, “This just made my day.”

THE MYSTERY OF MATTER: SEARCH FOR THE ELEMENTS Premieres August 19, 2015