Screening of ‘The Finest Hours’ will honor Station Menemsha crew

Martha’s Vineyard coasties, active and retired, will be special guests at a showing of the newly released film that depicts a famed rescue. 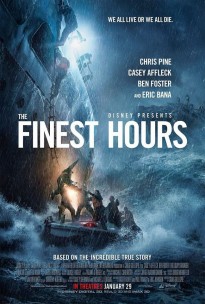 “The Finest Hours,” a Disney film starring Chris Pine, Eric Bana, and Casey Affleck set to be released next week, tells the story of one of the most dramatic sea rescues in Coast Guard history.The producers had no need to dramatize the event on which it is based, because one would be hard-pressed to outdo the well-documented facts.

magine setting out on a pitch-black February night in a 36-foot wooden boat into a howling winter blizzard, knowing you would have to make it through roaring surf breaking on a sandbar. You get over the bar and then face 50-foot waves you must plow through without any navigational equipment, to look for a group of men desperately counting on your arrival. You could turn back, nobody would blame you, in those conditions.

The crew of the Chatham Coast Guard station, all volunteers, had plenty to consider the night of Feb. 18, 1952, when called on to help rescue the crew of a tanker that had split in two.

Boatswain’s Mate 1st Class Bernard Webber, Junior Engineer Andrew Fitzgerald, Seaman Richard Livesey, and Seaman Irving Maske, who was not even assigned to the station but volunteered, boarded Coast Guard motorized lifeboat (MLB) 36500 and headed through the surf. A wave smashed the windshield and ripped away the compass as they navigated Chatham Bar, but they did not turn back.

The surf boats of that era were designed to carry a crew of four, plus up to 12 people in a rescue. On that perilous night, the crew of the CG-36500, dressed in foul-weather gear that seems laughable by today’s high-tech Gore-Tex standards, rescued 32 of 33 men from the stern of the tanker Pendleton, because Bernie Webber was unwilling to leave anyone behind.

And his crew was only one part of the story. Another MLB from Nantucket and a Coast Guard cutter joined the effort to rescue the crew of not one but two split tankers.

The movie is based on the book, “The Finest Hours: The True Story of the U.S. Coast Guard’s Most Daring Sea Rescue,” by co-authors Michael Tougias and Casey Sherman. Mr. Tougias has visited the Vineyard several times to speak at Island libraries about his numerous books, most of which tell gripping stories about survival and rescue at sea.

Despite the fear
In an email exchange last week, Mr. Tougias told The Times he had intentionally not seen the entire film because he wanted to wait for the premiere in Hollywood.

MVT: What was it like for you, knowing all the details of the rescue, to watch the filming?

Mr. Tougias: It was a little surreal walking into the movie set. For years I had the image of the Pendleton in my mind and imagined what it looked like from the water. And on the movie set they created the very image, using tons of steel to create half an oil tanker rising up from a giant pool. What really impressed me was the detail — from the rust on the side of the tanker to the old Jacob’s ladder. But yet it didn’t surprise me, because I had such respect for the two producers. In fact, each of them had previously produced movies that were among my favorites. Dorothy Aufiero produced “The Fighter” and Jim Whitaker produced “Cinderella Man.”

MVT: What was the strongest impression you took from the filming and the screenplay?

Mr. Tougias: That the Disney team tried to catch the essence of Bernie Webber — a reluctant, humble hero who just did what he had trained to do. And the scenes of Bernie and his crew taking their little 36-foot boat over the 50-foot breaking waves at the Chatham Bar were exactly like I pictured it. How they filmed that is a mystery to me. And those actors sure were wet and cold from all the many takes.

MVT: What do you hope people take from this film?

Mr. Tougias: That you can accomplish great things if you all pull toward the same goal and don’t worry about who gets the glory. People will see that Bernie overcame earlier failures, and still managed to do something incredible. And most importantly, these four rescuers had real fear, but they were able to continue to do the mission despite fear. It is normal to have fear and to be nervous — you just have to channel that into energy and take things one step at a time.

The residents of Martha’s Vineyard have a special affection and respect for the men and women of the United States Coast Guard that comes from living surrounded by the sea. Islanders rely on the Coast Guard to maintain the vital links that support the Vineyard community — and when all else fails, comes to their assistance.

Station Menemsha, with a crew of approximately 24 men and women, is responsible for an area that includes the waters west to the Rhode Island border, 50 nautical miles south of Martha’s Vineyard, Buzzard’s Bay, and Vineyard Sound.

The workhorse of the life-saving fleet, the MLB has a top speed of 25 knots. What it lacks in speed it makes up for in rugged, all-weather durability. The 47 is designed to operate in up to 50-knot winds, towering 30-foot seas and 20-foot surf. The MLB is completely self-righting: if a wave knocks it completely upside down it will roll until it is upright.

Its earlier precursor was the 36-foot MLB. Beyond the fact that Station Menemsha and Chatham share the same general sense of geographical isolation, there is a historical link.


Bernie Webber served on Martha’s Vineyard when the Coast Guard was located at Station Gay Head, and the lifeboat that was at the heart of the rescue mission saw service at Station Menemsha.

Mr. Iacono said everybody in the Coast Guard knew the story of the rescue; it was part of Coast Guard lore.

“I felt very honored to be able to run that boat,” Mr. Iacono told The Times.

The screening of “The Finest Hours” will be followed by a question-and-answer session with BMCS Robert Riemer, Officer in Charge and Capt. John Kondratowicz, Commander of Sector Southeastern New England. The Times is also offering free admission to former Coast Guardsmen (please RSVP at 508-693-6100, ext. 4, by Jan. 25). For ticket information, go to mvfilmsociety.com/2016/01/the-finest-hours/.

Sundance Sensation ‘Manchester By The Sea’ Near $10M Amazon Deal