Brockton, doubling as Detroit, will soon be on the big screen

By Marc Larocque
The Enterprise
January 23, 2017

A movie filmed in Brockton is coming soon to a theater near you. Scenes of arson, rioting and an Army National Guard crackdown that were recreated in Brockton are now set to appear on the silver screen as part of the “Untitled Detroit Project” on Aug. 4.

BROCKTON – A movie filmed in Brockton is coming soon to a theater near you.

Historic scenes of arson, rioting and an Army National Guard crackdown that were recreated in Brockton are now set to appear on the silver screen as part of the “Untitled Detroit Project” on Aug. 4.

In September last year, parts of downtown Brockton doubled as Detroit during the Michigan city’s historic 1967 riots, which lasted five days and ended with 43 deaths, 1,189 injuries, more than 7,200 arrests, and over 2,000 buildings destroyed. Filming was done in three sections of downtown Brockton and the Brockton Fairgrounds for the movie, set for release next year to coincide with the 50th anniversary of the riots, which historians say were motivated by the slowness of progress in terms of racial equality.

The movie, directed by trailblazing Oscar winner Kathryn Bigelow, would be the first film released through a new marketing and distribution operation established by the Los Angeles-based Annapurna Pictures, according to the Hollywood Reporter, which broke the news of the Aug. 4 premiere. 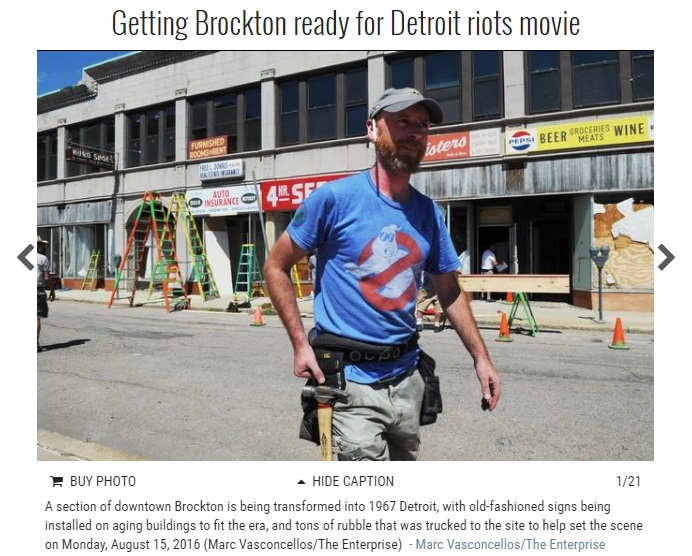 Brockton residents who took part in the movie as extras said they are looking forward to seeing the yet-to-be-titled movie for themselves.

“I’m excited to hear that it’s coming out,” said Jimmy Pereira, a transportation and community planner, who is also an aspiring actor. “Me and the other background actors have been patiently waiting for more information.”

Pereira was part of a foot chase scene that was filmed around a set constructed on Frederick Douglass Avenue in downtown Brockton, where pyrotechnics and props were used to simulate a building being burnt to rubble. He was pictured by The Enterprise alongside actor Tyler James Williams, who played the protagonist in the hit sitcom “Everybody Hates Chris.” Pereira said he hopes that the Detroit movie will set a precedent for future films to be produced in Brockton and throughout the state.

“It was a great opportunity,” said Pereira, adding that he stays in touch with other background actors involved in the scenes filmed in Massachusetts. “It was a great experience. … We’re thankful for an opportunity to participate. We’d like to thank everyone involved in the movie production, and bringing it to Brockton, and Massachusetts as a whole. … We’re hoping that, by having them filming here in Brockton, it’s going to spur a lot more activities with the film industry and the cultural arts here.”

The untitled Detroit movie also attracted other big-name actors to Brockton, including John Boyega, who became a household name after playing a main character, Finn, in the 2015 film “Star Wars: The Force Awakens.” During one night of filming around St. Patrick’s Church on Main Street, Boyega took to Twitter to thank Brockton for accommodating his new film.

Other actors who were spotted in downtown Brockton include Will Poulter, best known for his role in “The Maze Runner,” along with Ben O’Toole, known for his work in “The Water Diviner.”

The movie is described as a crime drama, with the plot set against the backdrop of Detroit’s 1967 riots.

Lynn Smith, who watched with interest as the movie set was constructed in downtown Brockton, where she works and is a member of the Frederick Douglass Neighborhood Association, said she looks forward to seeing the movie when it hits theaters in August.

“My hope is that, when the movie wins an Oscar for best achievement in production design, Brockton can claim a little piece of bragging rights for the set that was constructed right here on Frederick Douglass Avenue,” Smith said. “Hollywood star in the sidewalk, perhaps?”

City of Lawrence stars in 'Live by Night