Kevin Hart stayed cool on the water while filming a movie Tuesday afternoon in Boston.

The comedian and camera crews were in the Boston Public Garden while filming “Fatherhood,” an upcoming comedy-drama starring and co-produced by Hart.

At around 4 p.m., Hart took a ride in a swan boat along with a small camera crew and other cast members. 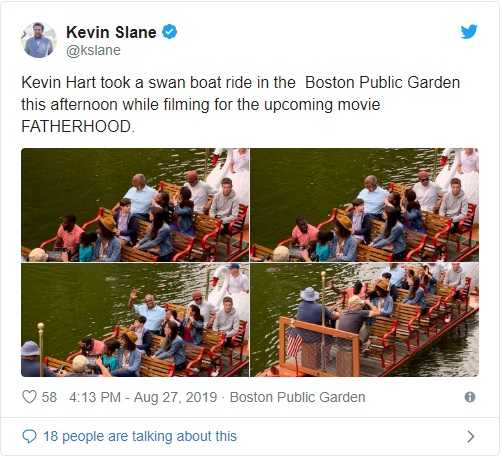 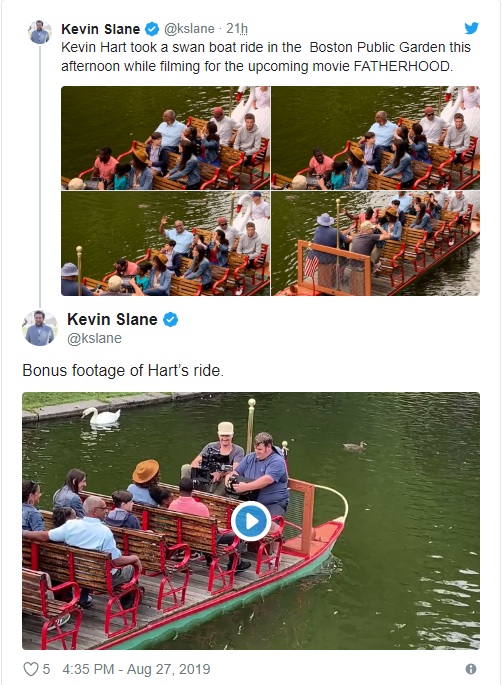 A member of the crew said that Hart and the rest of the production are filming in Boston on Tuesday and Wednesday, at which point the film will wrap shooting and move into post-production.

Based on the real life of writer/blogger Matthew Logelin and his book, “Two Kisses for Maddy,” “Fatherhood” centers on Matt (Hart), a father determined to give his daughter Maddy the best life possible after his wife passes away shortly after childbirth. Matt often finds himself unprepared for the challenges of fatherhood, and faces an additional complication when he begins to fall in love for the first time since his wife’s passing.

While the film is largely set in Boston and Minneapolis, the film’s production has been based in Montreal, where filming took place earlier this summer.

“Fatherhood” isn’t the first time a movie has brought Hart to Boston. In 2015, he filmed scenes for the action-comedy “Central Intelligence” in Boston, and took the opportunity to invite fans on a spontaneous 5k run around the Chestnut Hill Reservoir.