Lining up for Ricky

It’s true, many actors wanted a role in Gervais’s ‘Invention of Lying’ 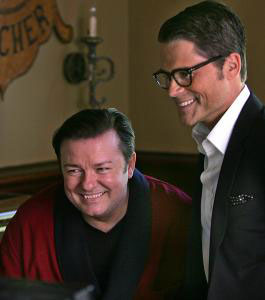 ANDOVER – Known for playing puffed-up guys in need of verbal Imodium, British comic Ricky Gervais is down-to-earth when the cameras are off. “The Invention of Lying’’ is his first directing gig, and he is also the star; but on the movie set, in a suburban neighborhood here last spring, he was a model of no-nonsense likability. There wasn’t a single delusion of grandeur in sight, like those that plagued his most famous character, the boorish David Brent from “The Office.’’

Rob Lowe, one of the stars of “The Invention of Lying,’’ which opens Friday, couldn’t say enough in favor of Gervais during the filming. “Ricky has a distinct philosophy on how he wants to shoot. It’s quick, it’s short. He’s got some of the best people in the world who just knock the ball out of the park. No one’s out there finding their character or struggling.’’

Jennifer Garner, also in the cast, concurred: “Ricky keeps the energy really light. You never know what to expect.’’

“Ricky is at that place in his life right now where he’s literally where Woody Allen was right before he made ‘Annie Hall,’ ’’ Lowe added. “Everybody wanted to be on this movie. Everybody is on this movie.’’

Indeed, in addition to Lowe and Garner, Tina Fey, Jonah Hill, Jason Bateman, Jeffrey Tambor, and Louis C.K. showed up to work with Gervais on the black comedy. That’s a little like a summit of contemporary humor. About a man who ushers untruth into a world where people can only tell the truth, “The Invention of Lying’’ was co-written by Gervais and his co-director, Matthew Robinson.

During a lunch break, Gervais relaxed in his trailer, wearing the silk-pajama costume that earlier inspired Lowe to call him “Hef’’ between takes. He was not “on,’’ as he tends to be during his much-loved awards-show presentations or his talk appearances on “The Daily Show With Jon Stewart.’’ Rather than playing the press’s “chubby funster,’’ a phrase he has bemoaned in his stand-up act, Gervais seemed more like a Zen funster. Indeed, he claimed rather convincingly not to care much about whether “The Invention of Lying,’’ or any of his work, rakes in money.

“I never worry about whether it’s a hit or not,’’ he said. “I honestly can say I’d rather know something was good but wasn’t a success than the other way around.’’

Of course, the dark side has come calling for Gervais, ever since his 2001 “Office’’ was celebrated as groundbreaking. Across the decade, he has been showered with Emmy kudos, not only for “The Office,’’ but for his follow-up series “Extras’’ and for executive producing the 2005 American version of “The Office’’ starring Steve Carell.

But Gervais has turned down roles in a “Pirates of the Caribbean’’ movie and “Ocean’s Twelve,’’ and he is consistently wary of the mainstream. “I want more people to hate ‘The Office’ than like it,’’ he said. “Otherwise, you’re doing something wrong.’’

Gervais said that while making “The Office,’’ he had no idea it would become an international sensation. “I knew it was good,’’ he said. “I got an adrenaline rush every day. I knew I was doing something different. I knew it would be some people’s favorite thing of all time. I didn’t care how many.

“I couldn’t be prouder of ‘The Office’ if it had won no awards and been canceled. To me, the point of something as lowly as a TV sitcom is to make a connection. To me it’s the size of the connection with each individual person rather than how many people it connects with.’’

Gervais’s acting and his writing style are so filled with natural pauses and awkward asides, you might not think he’s a serious student of the art of comedy. But he thinks long and hard about his approach, and he talked reverentially about Stan Laurel and Oliver Hardy, as well as about his friend Christopher Guest, who has a cameo in “The Invention of Lying.’’

“Christopher Guest is the most influential person on my performances – doing ridiculously funny things naturalistically. Laurel and Hardy started it, and he’s as big a fan of them as I am. We want to hug Stan and Ollie.’’

Gervais actually managed to place all his characters on a Laurel and Hardy scale. David Brent in “The Office,’’ he says, was a Stan – “he was a buffoon, and he was surrounded with other Stans. There was only one Ollie – Tim [the British version of our Jim].’’ Andy Millman on “Extras’’ was an Ollie in a world of Stans. And Mark in “The Invention of Lying’’ is a blend of both, he says: “He starts off as a bit of a loser, an Ollie, and he finds himself in situations where he is the Stan.’’

In the world of “Invention,’’ people – including politicians – are only able to speak the truth. Mark is a down-on-his-luck guy who magically discovers how to lie, and parlays his new talent into fame and fortune. But can he fib his way into the heart of Garner’s Anna?

As a director, Gervais is bent on doing things his way, even refusing to take producers’ notes. “I don’t care if I’m wrong,’’ he said. “You’ve only got your instincts. When I start doubting and I think someone else is right, and their idea is better than mine, then I’m not funny anymore. A good analogy for why I do everything myself is buying an airplane kit and then getting someone else to make it for you. Where’s the fun in that? They might do a better job than me, but the fun is building it.’’

Asked about his penchant for working with partners – Stephen Merchant on “The Office’’ and “Extras’’ and now Robinson on “The Invention of Lying,’’ Gervais said, “It’s not that I prefer it. It’s fun. If they’re like-minded, two heads are better than one.’’ Then he added, in a jokey voice, “If I get my own way.’’

If, as Lowe suggested, Gervais is like Woody Allen, then maybe we should expect him to start pursuing “Interiors’’-like dramas? “I never want to leave comedy behind,’’ he said. “I like using comedy as a Trojan horse. I can make it sneak up on people. And I can make people like someone enough to feel for them more than if it started serious.

“All your best friends, you start off by having a laugh and then you say, ‘I’m sorry to hear about your mother.’ That’s when they’re a friend. Not when they just joke for three years.’’

Matthew Gilbert can be reached at gilbert@globe.com.