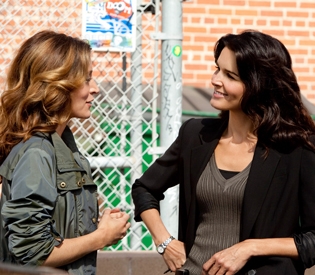 Tonight’s premiere of the set-in-Boston TNT drama “Rizzoli & Isles” may feel like reality TV to the Hub’s homicide cops. And that’s because one of their own, Detective Russell Grant, has been a fixture on the set, making sure the stars follow proper police procedure.

“I even did a lot of the work with the makeup people to make sure the wounds looked real,” the Roslindale tough guy told the Track. “You have no idea how totally opposite this has been from my real work.”

“Rizzoli & Isles,” which premieres at 10 p.m. after “The Closer,” stars Angie Harmon as the only female on the Boston police homicide squad and Sasha Alexander as the medical examiner – and Jane Rizzoli’s BFF.

The series is based on characters from Maine author Tess Gerritsen’s novels.

Grant said he hooked up with the series’ writer, Janet Tamaro, over a year ago through a friend. And for the past few months, he’s been shuttling between Boston and Hollywood to make sure Tamaro & Co. were keepin’ it real.

“I had Angie Harmon out here for three or four days shadowing the homicide unit,” he said. “She got to see a real homicide scene in Dorchester. And then I had Lee Thompson Young (who plays another detective) get a feel for the homicide unit, and Jordan Bridges, who plays Jane’s brother who is a uniform guy, rode along with the guys from District 4.”

So, Detective, got a lead on why this TV show is not being filmed in Boston???

“Oh, don’t get me started,” he laughed. “I know at one point they wanted to come here to film but the actors thought it would be too much of a hardship. So they sent out a director right from the start to do the second-unit shooting.”

“I’ve got to hand it to them, though, they have a desire to get everything as close to real as TV will allow and they are dedicated to that,” Grant said. “They spent a tremendous amount of time with me to get a feel for procedure, investigations and detective work. On set they kind of deferred to me for anything to do with the crime scenes – how the bodies were laid out, how the injuries looked. Sometimes they push the envelope, but generally they’re pretty right on.”

On a personal note, Grant said the TV types included one of his own anecdotes in an upcoming episode with Dorchester’s own Donnie Wahlberg, who plays a former drug cop who transfers to the homicide department.

“At the end of the scene, someone asks Donnie why he looks like he’s in pain and he admits that his feet are killing him because he hasn’t worn ‘grown-up shoes’ for years,” said the cop-gone-Hollywood.
“That happened to me years ago when I transferred after 17 years in the drug unit,” Grant continued. “There was a homicide out behind our building and the detective sergeant told me I looked like I was going to be sick. I told him the same thing. I had worn sneakers or loafers for 17 years and had on a pair of grown-up shoes that were killing me.”

Tonight, Grant and his wife, Susan, will be Gerritsen’s guests at the Camden Opera House in Camden, Maine, for the premiere and post-party.

And if any in Russell Grant’s unit feel the need to rib him about the show tomorrow, remember: the man does carry a gun!