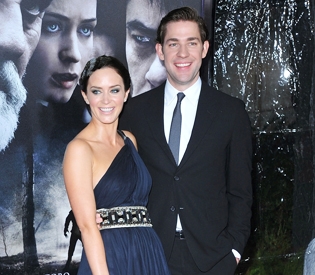 Newton homey John Krasinski and his British-born fiancee, Emily Blunt, finally exchanged vows this past weekend at the Villa D’este in Como, Italy. “John and Emily were married on Saturday in a private ceremony,” Krasinski’s rep told Us Weekly mag.

“It was an outdoor ceremony and absolutely beautiful,” a spy told the mag. Celebrity guests George Clooney and his Italian galpal Elisabetta Canalis were in attendance. Blunt and Krasinski had reportedly been staying at Clooney’s nearby Lake Como estate since the July Fourth weekend.

“It was an official ceremony. They are husband and wife,” the source added.

The duo got engaged in August after about a year of dating. “The Office” main man Krasinski, 30, proposed to Blunt, 27, with a 3-carat Edwardian diamond and platinum ring from Neil Lane worth about $100,000.

At the time, Krasinski told TV’s “Access Hollywood” that the proposal was “very casual” but very emotional, too. “She did cry after I cried, and we cried and then everyone around us was crying,” he said.

Blunt, who won a Golden Globe in 2007 for her performance in the TV movie “Gideon’s Daughter,” previously dated Canadian crooner Michael Buble for three years after the pair met backstage at an Australian TV awards show.

Before dating Blunt, Krasinski had been romantically linked to his “Office” co-star and Harvard grad Rashida Jones.