10 reasons “Jaws” might be the best film ever made 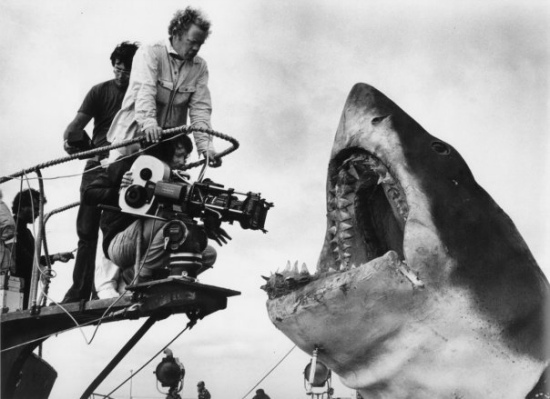 Here’s ten reasons why it deserves all the praise it gets.

It also made summer the new breeding ground for big-budget, big box office movies when the period had before been reserved for films which studios felt wouldn’t make a lot of money. It also had a direct influence on the direction of future films such as Ridley Scott’s Alien, which was pitched as “Jaws in Space”. [link to 35 years since jaws article – More on Jaws and Spielberg’s influence]

2. First film to break $100 million at US box office Jaws was the first film to break the once thought impossible box office receipt of $100 million. The film beat The Exorcist, which had taken $89 million in 1973. Jaws is currently the 7th highest grossing film of all time when adjusted for inflation. [link to Spielberg financial success]

3. Steven Spielberg Without the success of Jaws Spielberg may never have got another job. He had the studio breathing down his neck the entire shoot and went obscenely over budget. The film had originally been budgeted at $4 million but Spielberg ended up making it for $9 million. All was quickly forgotten when the first weekend’s box office receipts came in, but imagine if Jaws hadn’t captured the public’s imagination. Spielberg’s career may have then turned out very differently – consider a world without E.T., Close Encounters, Indiana Jones, Schindler’s List, and Jurassic Park.

4. Fear of the unknown The shark never worked properly. It could have been a problem. Spielberg made sure it wasn’t. By inferring the shark’s existence through various techniques – the use of point of view camera shots photographed underwater, the reactions of the characters, John Williams’ Da-da Da-da score, the shark’s fin or recognisable props as stand-ins (such as the jetty dragged by the shark when attacking the two midnight fishermen or the barrels used by Quint to bring the shark to the surface). It was a fantastic ploy that hid the menace in our own imaginations heightening the tension and making the shark’s eventual reveal all that more riveting.

5. Film better than the book Peter Benchley’s novel shares a lot less with the film than you’d imagine and the writer frequently stated how much he hated Spielberg’s ending. Benchley’s book may have a great premise but it’s a damp squib in comparison to the movie.

6. Ocean realism The 1970s saw filmmakers leave the studio in favour of authentic on-location shooting. Jaws was no different. However, it went further by shooting its ocean scenes actually in the sea. This adds a realism that couldn’t be achieved in a studio tank. Spielberg was frequently advised not to shoot on the actual sea but ignored this advised. The end result proves the director was right despite the logistical problems posed by the ocean.

Dreyfuss didn’t want the part at first. But after seeing his latest performance in The Apprenticeship of Duddy Kravitz he became worried that it was so poor he wouldn’t be offered another role in Hollywood. He quickly called Spielberg hoping the role of Matt Hooper was still available. It was. The rest is history.

Roy Scheider wasn’t thought of for the part of Brody (it was first offer to Robert Duvall who told Spielberg he was only interested in Quint) but after overhearing Spielberg talking about the movie at a party asked if he could play the part. Spielberg, a fan of The French Connection and Schieder’s performance in the film, was only too eager to get Scheider on board.

Robert Shaw wasn’t the first choice for the role of Quint. Charlton Heston wanted to do it but Spielberg thought he was far too heroic. If Heston was out there on the Orca the shark would have no chance, Spielberg mused. So he wanted someone with a little more frailty. He offered the role initially to Lee Marvin and Sterling Hayden but both eventually passed. Although Jaws’ producers wanted Spielberg to consider Robert Shaw, the director became interested in Jon Voight. But, he did relent, and it’s difficult to envisage anyone else playing Quint as well as Shaw did (even if he was drunk most of the time!).

8. John Williams’ iconic score Simple yet so effective. John Williams’ reoccurring notes – only two of them, an E and F played alternately – has become pop culture’s theme tune of impending doom. With such a terrific musical reference to the shark it didn’t matter so much that Spielberg’s robot fish malfunctioned constantly. You only needed to hear those notes to know something monstrous was lurking. The score ranks 6th on the AFI’s 100 Years of Film Scores list.

9. Pop-Culture Take away the merchandising (which was huge and still is, from Jaws t-shirts to Jaws toys to soundtrack CDs and posters) and the film still maintains its place in pop culture. From the often quoted lines: “You’re gonna need a bigger boat” and “Smile you son of a bitch!”, to John Williams’ two-note theme tune, the film has grown bigger than itself in so many ways that it exists in the lives of people who haven’t actually seen the movie.

10. A (horror) film for everybody Horror films do get a bad reputation. Some of that is justified but rarely does Mr Oscar cast his gaze towards the most refined and beautiful work of the genre. Jaws however transcends the boundaries – it isn’t a horror movie aimed just at adults, it’s one the whole family can enjoy. I remember watching the film for the first time as a six or seven year old with my sixty year old Granny. And she loved the film.

Is 'The Town' Oscar-Bound After Box-Office Win?