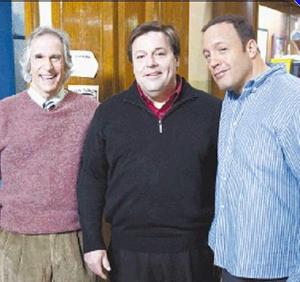 QUINCY-That’s a wrap, and for the city it was a lucrative brush with Hollywood.

Columbia Pictures, which shot the feature film “Here Comes the Boom” in Quincy, paid the city $114,500 in rental fees for the buildings it used. The film, starring Kevin James, is expected to premiere next summer.

“All in all, for the Quincy Public Schools I thought it was a very positive situation,” Superintendent Richard DeCristofaro said.

Initially, the city and Columbia Pictures Industries Inc. of California only agreed to rent the former Quincy High School on Coddington Street, which is vacant, for $80,000.

But as shooting progressed, the crew expressed interest in using other city property. The third floor of Coddington Hall, a former Quincy College building, was renovated into Kevin James’ apartment in the movie, DeCristofaro said.

Columbia paid $7,500 to use the third floor of Coddington and $15,000 to use the building’s parking lot, which was jammed with trailers and other support vehicles during the filming, which ran from February through June. The studio’s agreement with the city allows crews to return through August for any re-shooting.

DeCristofaro said the studio hired their own cleaning and security crew to maintain the property. “They really took care of the former Quincy High School,” he said.

The movie’s plot is about a teacher who becomes a professional fighter to raise money for the school’s music program. Quincy school band members were tapped for some scenes and were paid a total of $2,000.

“They felt that our students in the band deserved a stipend, so it was given to the band,” DeCristofaro said.

A casting call was also held, landing some locals spots as extras.

Mayor Thomas Koch, whose office negotiated the initial lease agreement, said Quincy was a perfect fit for the movie because it was set in a school and the city had vacant school space.

“This was tremendously positive,” he said. “Certainly it didn’t hurt us economically. It had to have been a boost to local business in some ways. The stadium (shoot) was one day and we got a $10,000 check for school athletics. I think that’s awesome.”

Koch said the logistics have been less favorable in other movie proposals the city has had, like one that called for busy Newport Avenue to be closed to traffic.

Despite the smooth experience, cameras aren’t likely to roll again in the old school buildings. The city plans to demolish the former Quincy High School, which was built in 1922, and move school department offices into Coddington Hall.

Jack Encarnacao may be reached at jencarnacao@ledger.com.

Reeling in the movies

SILVER CITY ON THE SILVER SCREEN